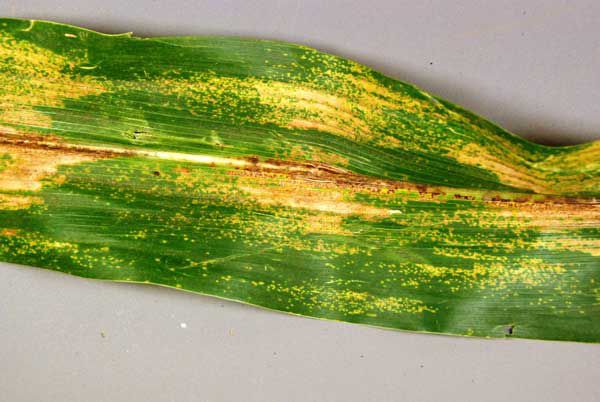 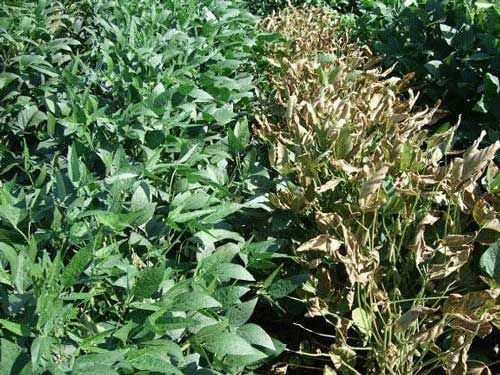 The soybean variety on the right in a recent K-State performance test was susceptible to SDS. The foliage was completely dead by early pod fill. Photo by Bill Schapaugh, K-State Research and Extension.

What were the most prevalent diseases affecting corn, soybeans and grain sorghum in Kansas during the 2019 growing season? This article recaps the most active diseases affecting summer row crops and discusses the growing conditions that played the biggest role in their development.

Total yield loss from corn diseases was below the long-term average. Gray leaf spot got off to a slow start but was near normal levels by seasons end. Southern rust had its earliest arrival ever being first reported on July 13. Hot, dry weather stalled its initial development, but August rains contributed to late-season increases. Many growers had decisions to make regarding late-season fungicide applications.

An unusually high amount of Physoderma brown spot was present in eastern Kansas in 2019. High incidences of the disease were also reported in Nebraska and Iowa. Research is underway evaluating the effectiveness of fungicides as a management tool. Early results suggest an application at the V8 stage of development can reduce foliar symptoms but increases in yield are inconsistent.

Ear rots were present at a lower incidence than in recent seasons with very little Aspergillus ear rot (aflatoxin) being reported. Fusarium ear rot was the most common, however, there have been a few reports of high fumonisin levels in the grain. Diplodia ear rot was present, but at lower levels than the past three years.  Due to optimal conditions favorable for development, Fusarium stalk rot was prevalent in many fields. In a few fields that experienced mid-season drought, charcoal rot was present. Diplodia stalk rot was observed in some southwest Kansas fields that received unusually high amounts of rainfall.

While soybeans got off to a late start, there were only a few significant disease issues. Phytophthora root rot continues to be a growing concern. Rather than early season infections that lead to the common basal stem rot and plant death, recent Kansas problems have resulted from mid- to late-season rains that lead to a generalized root rot where the only symptom is a somewhat earlier maturation of the plant resulting in reduced yields due to the shorter grain filling period.

Soybean cyst nematode continues to expand with at least one new county (Marion) being identified as positive for SCN in 2019. Eighty-three soil samples were received in the diagnostic laboratory this season. Of those, 48 percent were positive for SCN with an average egg plus juvenile count of 300 per 100 cc of soil. The resistance source in current varieties is gradually being overcome by Kansas populations of SCN. Growers are encouraged to extend rotations and rotate varieties in known infested fields and to re-sample fields at the end of each season that soybeans are grown.

Sudden Death Syndorme continues to be a problem in river bottom areas especially along the Kansas and Missouri Rivers. Growers are encouraged to plant the most resistant varieties available and use ILeVO or Saltro seed treatments.

Ending on a positive note, unlike 2018 when it was problematic in some fields, frogeye leaf spot was difficult to find in 2019.

Due to an extended dry period in late June and July, disease pressure in grain sorghum was well below average. Sooty stripe was present as usual, but it came on later in the season and had minimal effects on yield in most fields. Sorghum rust could be found near the end of the season, but it rarely impacts yield due to its late arrival.

The most significant disease, as in most years, was Fusarium stalk rot. While there is always some lodging associated with stalk rot in grain sorghum, reports of significant amounts of lodged sorghum were not received. Sorghum harvest was ahead of the five-year average. Less time standing in the field reduced problems with head molds. Other diseases observed include rough spot, target spot, and northern corn leaf blight.

(Doug Jardine is an extension plant pathologist for Kansas State University. This article was part of the K-State Agronomy eUpdate issued on Dec. 20.)