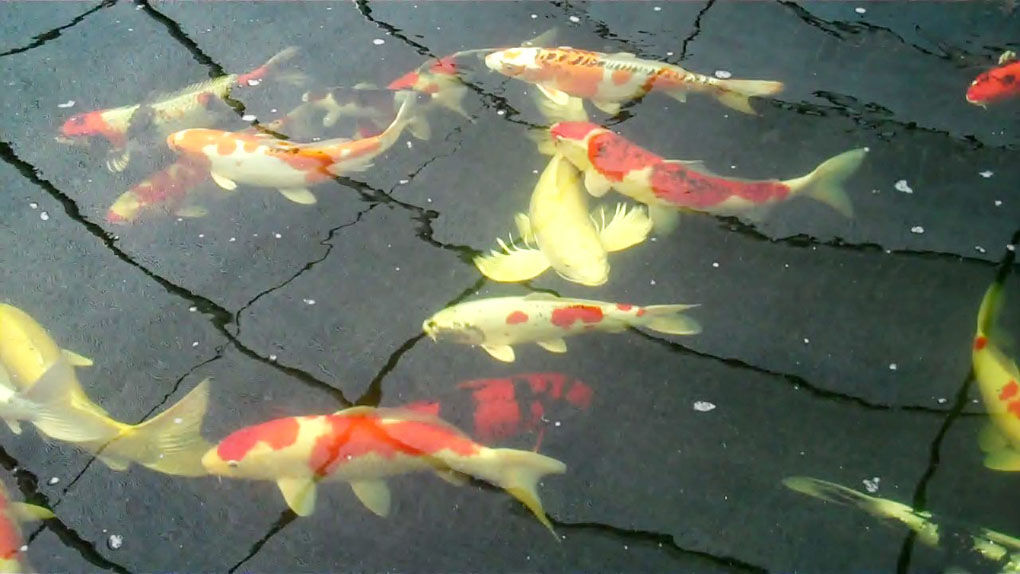 The McBride family turned a hobby into a business with their koi fish. 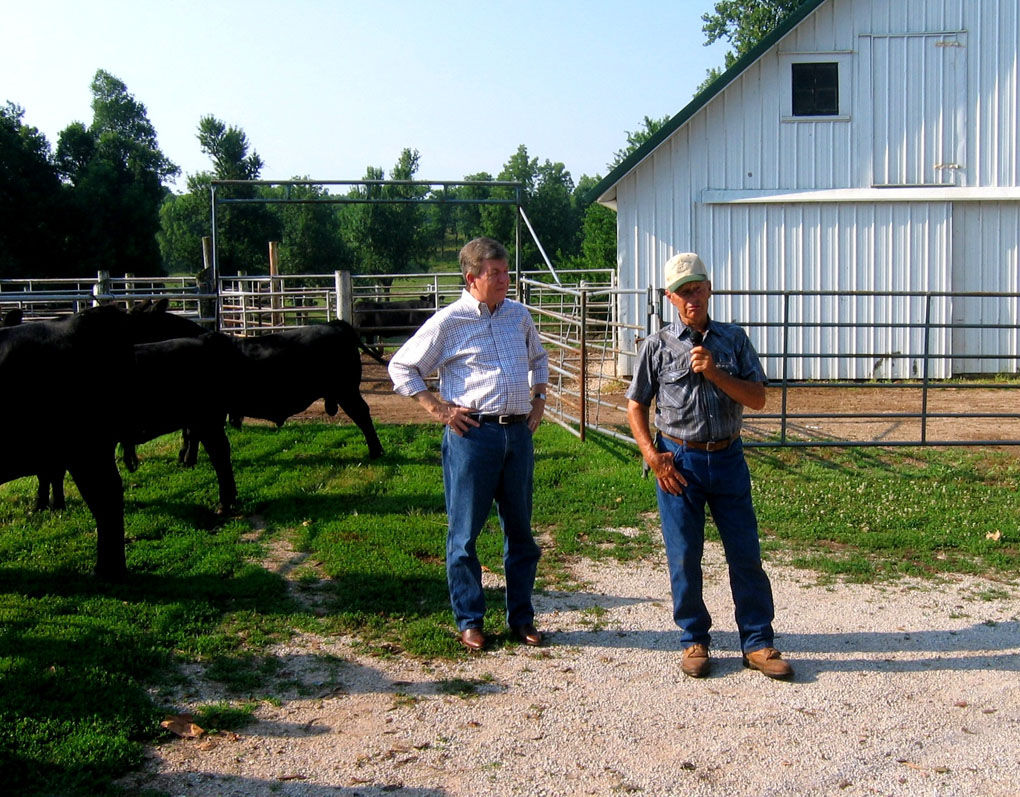 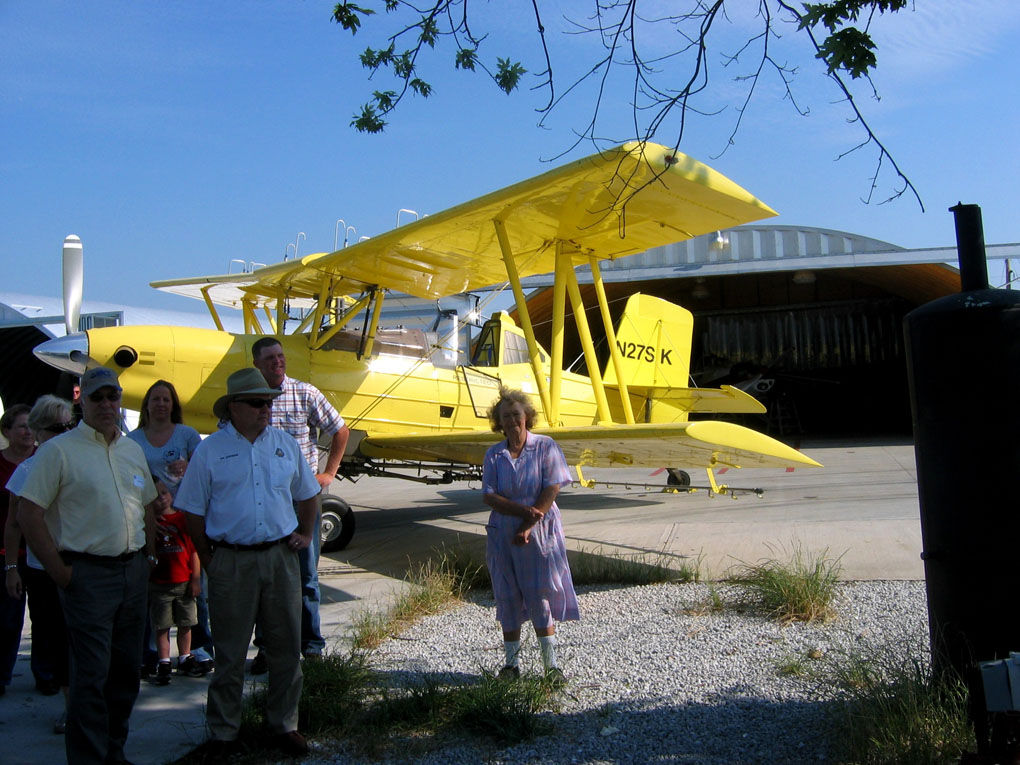 Mrs. Kingsley, right, and some of the tour participants learn how Plane Cents Aviation got its start.

The McBride family turned a hobby into a business with their koi fish.

Mrs. Kingsley, right, and some of the tour participants learn how Plane Cents Aviation got its start.

From a traditional family beef farm to a 4-H family whose passion is showing goats to a body shop businessman who is now a successful Koi farmer, Southwest Missouri Congressman Roy Blunt’s 14th Annual Agriculture tour highlighted the diversity of agriculture as it rolled across the southern portion of the Seventh district last week.

The day and a half tour took attendees to nine very different farms and agribusinesses but they all had one thing in common—showcasing just how sustainable farmers really are.

Congressman Blunt said his goal for the tour has always been to bring community leaders together and take them to the farm and show them the economic impact agriculture has throughout the district.

The first stop included one of the oldest and most respected Angus herds in Missouri, Pipkin Clearwater Farm, located near Springfield, Mo.

The original deed to Clearwater Farm dates back to 1857 where in the early years Berkshire hogs were an integral part of the operation. In 1933, W.H. and his son Morris traveled to Kansas and purchased the farms first Angus cattle.  Since then, Clearwater Farm has had performance as a primary objective with the farm actively involved in breeding registered Angus since 1962.

Today, W.D and Jim, along with their families, run nearly 500 Angus cows and market more than 100 bulls each year by private treaty.

When asked about the ever changing cattle market and providing their customers with the genetics and traits they want in a bull, Jim said they go by the advice his granddad always went by, “if you stay in the middle of the road, you’ll catch them coming both ways,” he said. “If our customer doesn’t make money, then we don’t make money and our customers’ satisfaction is very important.”

Another stop on the tour highlighted four brothers’ fascination for airplanes and passion for farming.

The Kingsley Brothers, Kiman, Kaland, Kaleb and Kevin, are farmers and pilots. They have worked their 2000 acre farm located near Miller, Missouri for four generations. What started out as flying for pleasure has turned into a very successful crop dusting business called “Plane Cents Aviation.”

“The need for crop dusting was far greater than we imagined,” Kiman said.  “In 2003, we began with three to four customers as part-time work and now we have over 300 customers, four Piper Pawnees and the Grumen Ag Cat, and are still growing.”

According to Kiman, they have customers in the four-state area and can cover 140 acres in one hour and with their new bigger plane they may be flying over Iowa.  “When a farmer can’t get in his field to do what he needs, it’s very stressful.  That’s when they call us,” said Kiman.

A highlight of the tour was seeing the passion and enthusiasm youth have for agriculture.

Dave and Dixie Rockers of Rocky Acres Farm, believe the farm, their 90 head of goats and 4-H is a great way to raise their four children, Alyssa, Hannah, Lydia and Brett. As their children grew old enough to participate in 4-H, Boer goats seemed like a natural project for them.

“The farm is a family undertaking, making it profitable to raise kids,” Dave said. However, the prime objective is to see their children profit from the experience and embed the values that 4-H and other activities teach kids to become productive, responsible citizens. All four children are involved in showing the goats and demonstrated to the group their showing skills, public speaking skills and love for the farm and their goats.

Whoever said hobbies can’t make money needs to talk to Jerry McBride and his family about their 40 acre, 27 pond Japanese Koi operation east of Neosho.

“We took a trip to St. Louis to the Botanical Garden and noticed a lake with koi and we got the bug,” Jerry said.

For 28 years, Jerry ran a successful body shop business, but 12 years ago his passion for growing fish quickly grew into a full time job.

“You get to work outside and your love of the hobby becomes a passion,” he explained.

Raising the koi is like any other farming activity, its hard work.

“It’s a lot like dairy farming, there are no days off,” he said.

The McBride family estimate, they have over 100,000 koi of all sizes and breeds and ship more than 75 percent of their orders to the east coast to customers who want this decorative fish.

“Top fish bring big dollars and a single koi may have a value of several hundred dollars,” Jerry said.

Some of the rarest top quality koi can bring more than $4000 on McBride’s Website.

Congressman Blunt’s final tour wrapped up by bringing together the hosts of the 158 sites visited during the 14 year history of the Southwest Missouri Agriculture Tour.

A special presentation was given remembering the places, people and diversity of southwest Missouri agriculture.