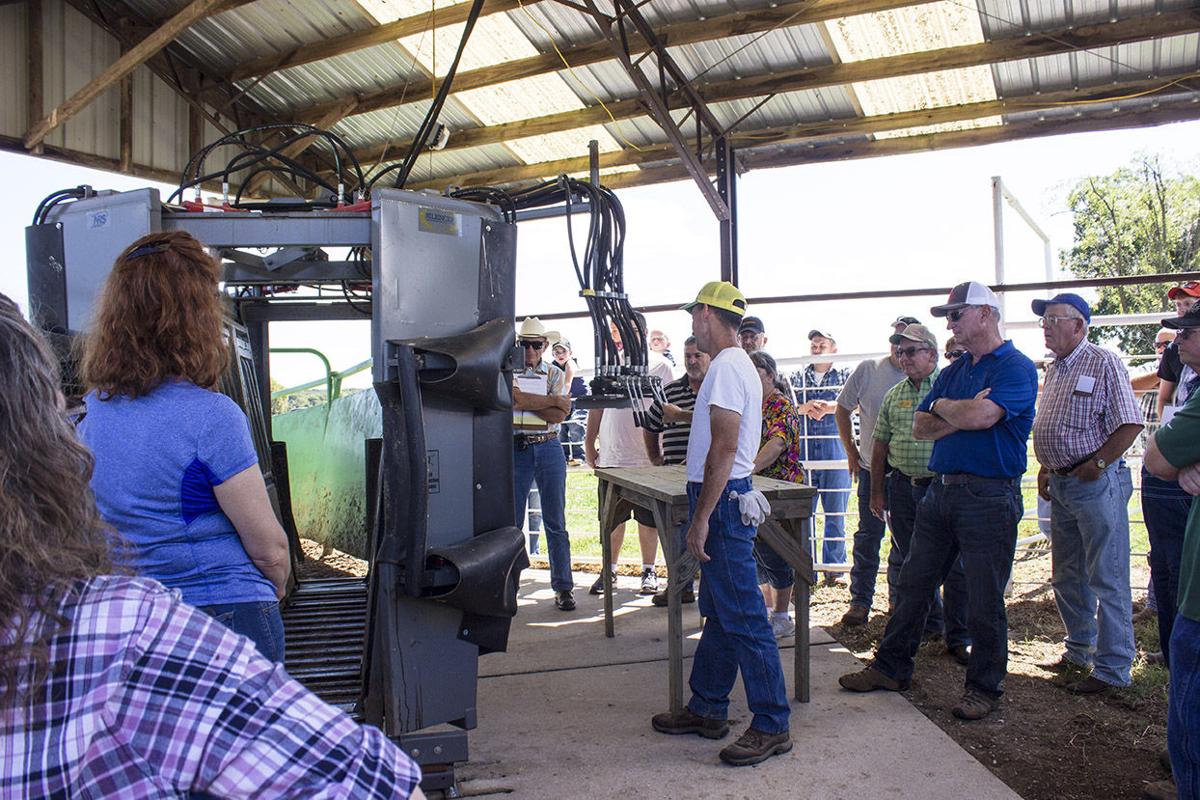 During the Barry County cattle tour, participants had the chance to inspect the working facilities at the Anderson Ranch near Seligman, Missouri. 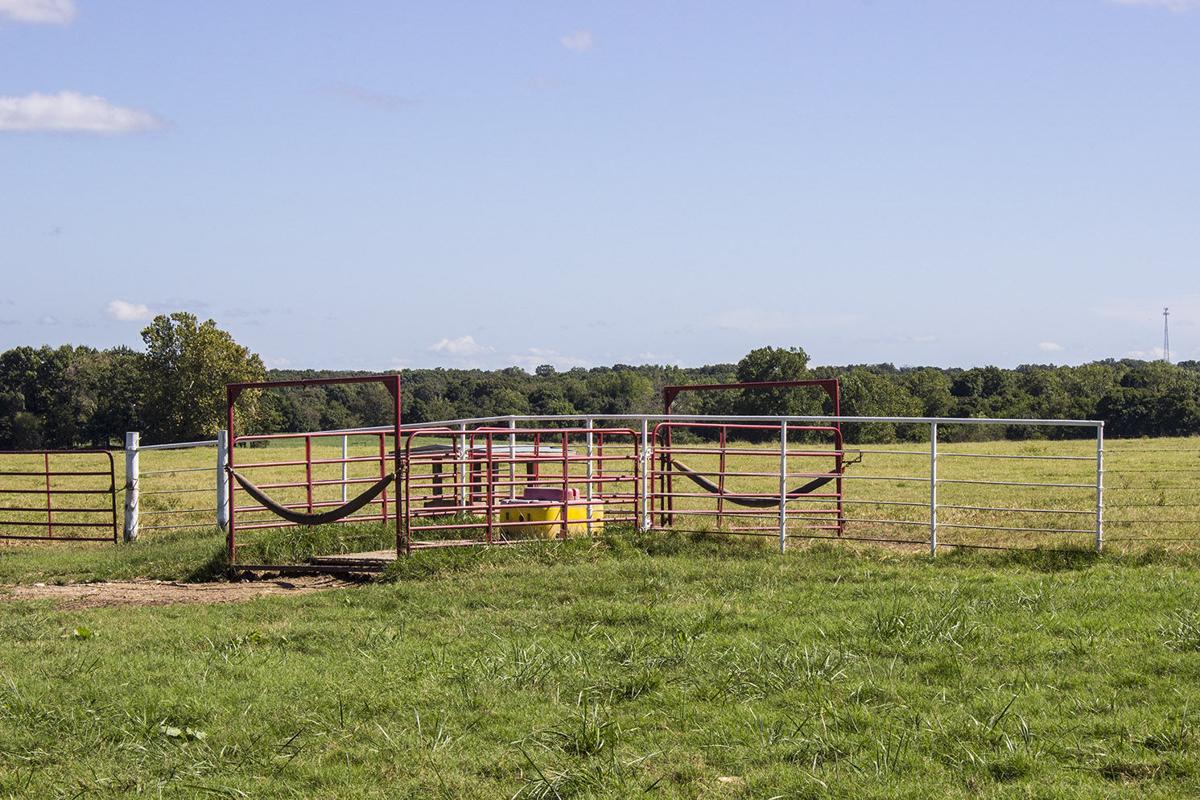 During the Barry County cattle tour, participants had the chance to inspect the working facilities at the Anderson Ranch near Seligman, Missouri.

Every cattle rancher operates a little differently and those differences can vary widely even within Barry County, Missouri.

On Saturday, Sept. 17, ranchers met up at the Anderson Ranch south of Seligman for the Southwest Missouri Cattlemen’s Association cattle tour and to learn what three ranches do to stand out from others in the area.

“Bermuda’s sustained this farm,” said Lindell Mitchell, farm manager of the Anderson Ranch. They have a forage program involving Bermudagrass and novel-endophyte fescue. Both are stockpiled and they also hay the forages.

Gary Anderson, owner of the operation, said they have about 750 acres and have turkey and broiler operations in addition to 300 Angus-influenced cows.

Voyd Brown, DVM and veterinarian for the ranch, said Anderson and Mitchell “want to do it right.”

The Anderson Ranch has a Silencer hydraulic squeeze chute with a scale to make keeping records and working cattle a more efficient process.

They chose the chute because it’s “easier on the animal, easier on us,” Anderson said.

“I’ve always been big on having a scale,” Anderson noted, adding they keep records in the computer and update information while they’re working the livestock.

Brown said they pay great attention to detail in their records, keeping track of weights, dam and sire, teat condition and other factors that will help when culling time rolls around.

“We have not bought a female on this place in 25 years,” Anderson said. All replacements are raised on the farm and they heavily use EPDs. They also do pelvic checks on their heifers.

Mitchell explained they keep two bulls and rotate them onto cows every 14 days, at most.

“That’s how we think we get them bred so quick,” he said, stating they have a 60-day calving window. They have been focusing on moving calving to the front end of the season and, in the first 12 days of their fall calving window, they’ve had 83 of 140 cows calve.

Tim Schnakenberg, University of Missouri Extension agronomy specialist, lauded the Anderson Ranch for their use of Bermudagrass. He also recommended more producers consider getting at least 5 to 10 percent of their forage programs in warm season grass.

“I really think we’re spinning our wheels with fescue hay,” Schnakenberg said, explaining the prime time for haying in the area is during the time warm season grasses are peaking. He added warm season grasses also allow for more flexibility than fescue when it comes to weather and timing during hay season.

Schnakenberg cautioned producers to be on the lookout for the Bermuda stem maggot, a pest making its way north.

“Arkansas is talking a lot about it lately,” he said, adding the pest has the potential for yield reductions. “Hopefully it’s something that won’t hit us very hard.”

For producers experiencing trouble with the sugarcane aphid, he suggested considering using a millet instead of sudan crosses.

Eldon Cole, MU Extension livestock specialist, praised the Anderson Ranch for their use of EPDs and novel-endophyte fescue.

He stated the cows were “as slick as moles” and showed no signs of fescue toxicosis or stress.

Cole also recommended looking into genomic testing as the “next wave to jump on” in addition to using EPDs. These tools, along with herd records and data, should be used to see the results of attempted improvements in a breeding program.

“I guarantee these things work,” he said.

At A&W Brooks Farms near Exeter, Phillip Brooks runs about 200 cows on 700 acres. The primary forages in the operation are Kentucky-31 fescue and sudangrass.

For his weaned calves, he backgrounds them on a little grain and rotates them in a sudan-sudan-fescue pattern. He said his average daily gains have been around 2.68 pounds.

“We’re trying to move to all fall calvers,” Brooks said. “I don’t like to find a frozen one out there.” He likes to find calves when he can still wear short sleeves, he added with a laugh.

Brooks was a buyer of Show-Me-Select heifers and is now participating in the program. He will be selling some in the Nov. 18 sale at Joplin Regional Stockyards.

“It works pretty good for me,” Brooks said, adding he has some SMS cows that have reached double-digit ages.

The farm’s cattle working facility includes a covered corral with fans to keep animals cool and a hydraulic chute from Zietlow.

Gary Fields, Brooks’ banker, has helped Brooks get his herd records out of the shoe box and organized into a Microsoft Access database on the computer.

When keeping records, Fields said putting them into a computer is a “no brainer” because it allows you to sort and look at trends.

“When you learn to study the information, you pick up different things.” He used the example of being able to track poor teats through the data and using that information to cull animals with that trait or that may carry the trait.

“Do the work on the front end and you’re not getting wrecks on the back end,” Fields said, advising producers to use their herd records to make wise management choices.

He also recommended having a permanent ID like a brand on each animal because ear tags can get lost and make records harder to keep.

At the last stop on the tour, producers visited Schallert Brothers Farms west of Purdy. The three-generation operation runs about 1,000 head of stockers on fescue each year.

“We just buy anything we can clean up a little bit,” said Curtis Schallert, adding they don’t buy the best or the worst cattle but just try to buy animals they can put weight on.

The operation is forage-based and all fescue. They’ve been using crops —corn, soybeans and wheat — to convert hot fescue pastures before planting novel-endophyte fescues back into the fields.

Schallert said they do feed some grain to get Bovatech into the animals and to count them but they do not feed antibiotics.

“The better forage you keep them on, the less sickness you’re going to have,” he said.

The calves are worked — cut, dewormed implanted, given shots of vitamins and vaccinated — in a hydraulic chute which Schallert said is necessary with the number of animals they work at a time.

“I think cattle feeding is a disease…once you get started, it’s hard to quit,” he said.

The Schallerts have also used anyhydrous ammonia to treat fescue hay since the early ‘80s to nullify some of the effect of fescue toxicosis.

Schallert also shared why they medicate calves with a dart gun.

“I think we use less medication than we did before,” he said, explaining they can catch the animal at the onset of sickness rather than waiting for help to get the calf up and worked. “I think that’s the key — early treating.”

With the dart gun, the operator uses a holographic sight and aims for the calf’s neck where the dart will be for 10 to 15 minutes before the barb dissolves and falls to the ground.

“You just can’t get in a hurry,” Schallert said. Before feeding calves, he loads the dart up and has it ready to go.

“I’ve never shot a calf where I didn’t want it to go,” he said, though he admitted he did miss — once.

“All you’ve got to do is have some patience.”

“You’re treating cows when they need to be treated,” the veterinarian explained, adding it saves time and stress on the animals as well as on the producer.

“I just do a drive-by shooting, just like checking your cows,” he said with a laugh. £