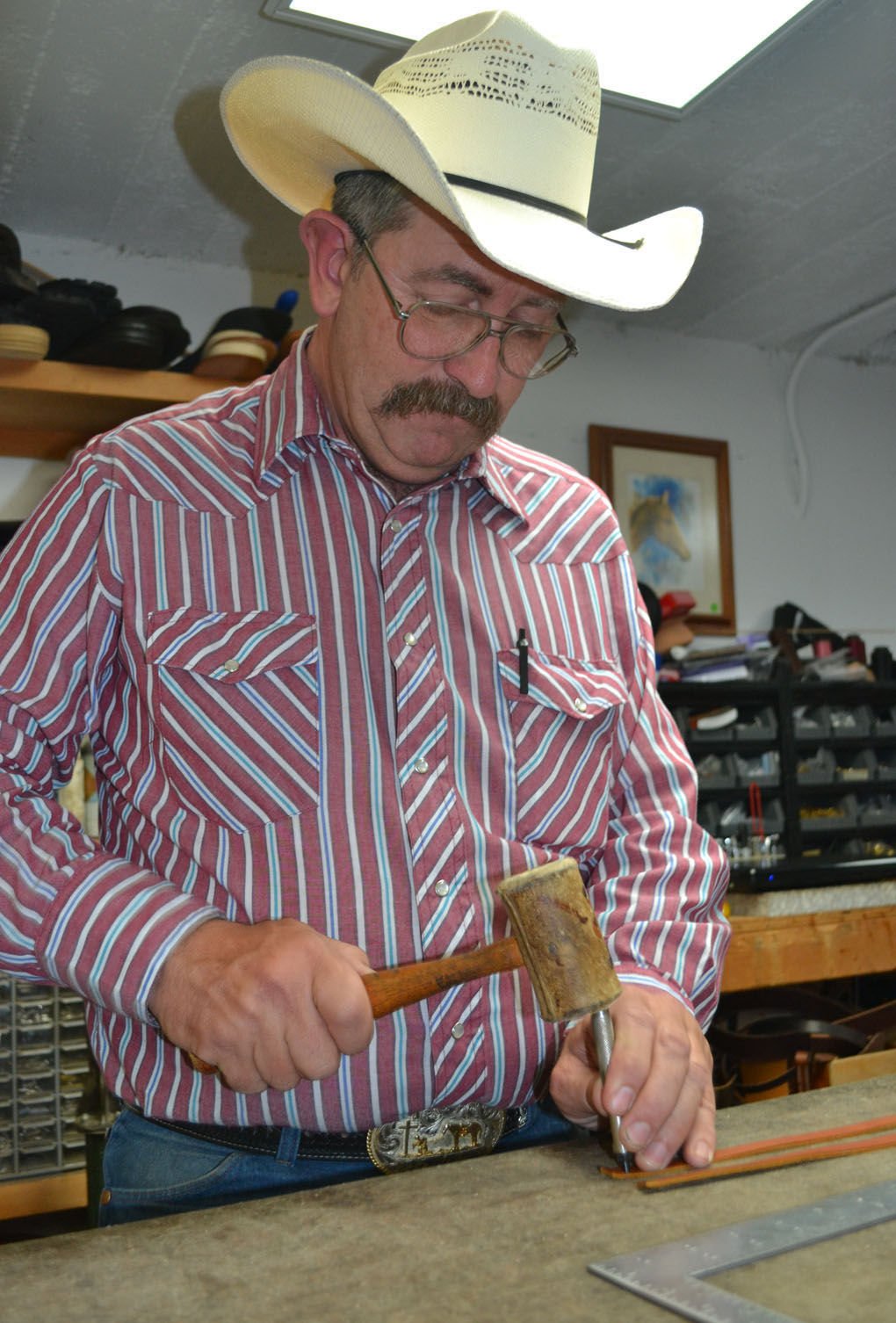 Bruce Brock works in his shop in the basement of Jim Bells and Son Western Wear, Cottonwood Falls, Kansas. Brock, a native of Chanute, Kan., began working with leather while working on a ranch in eastern Colorado. 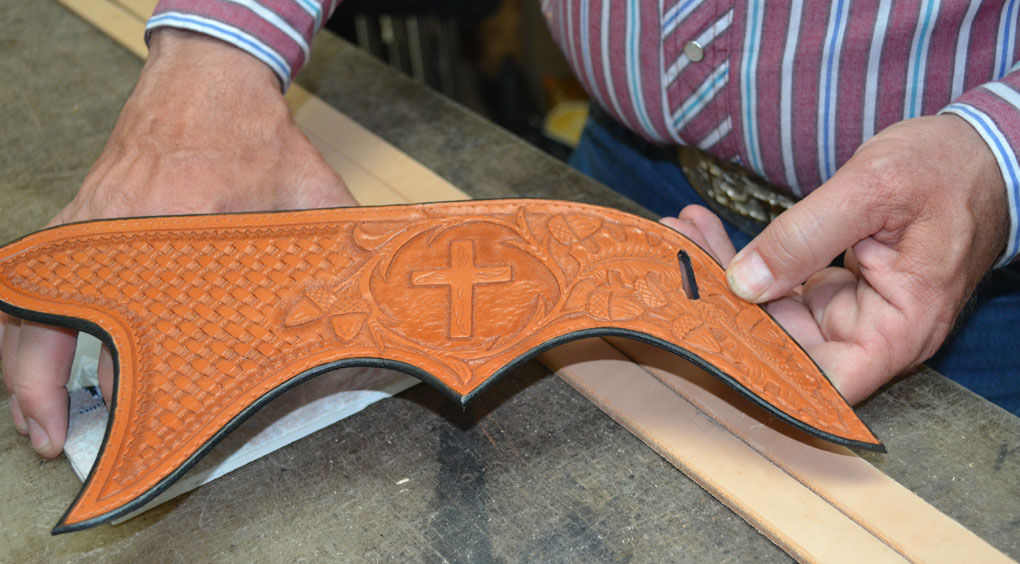 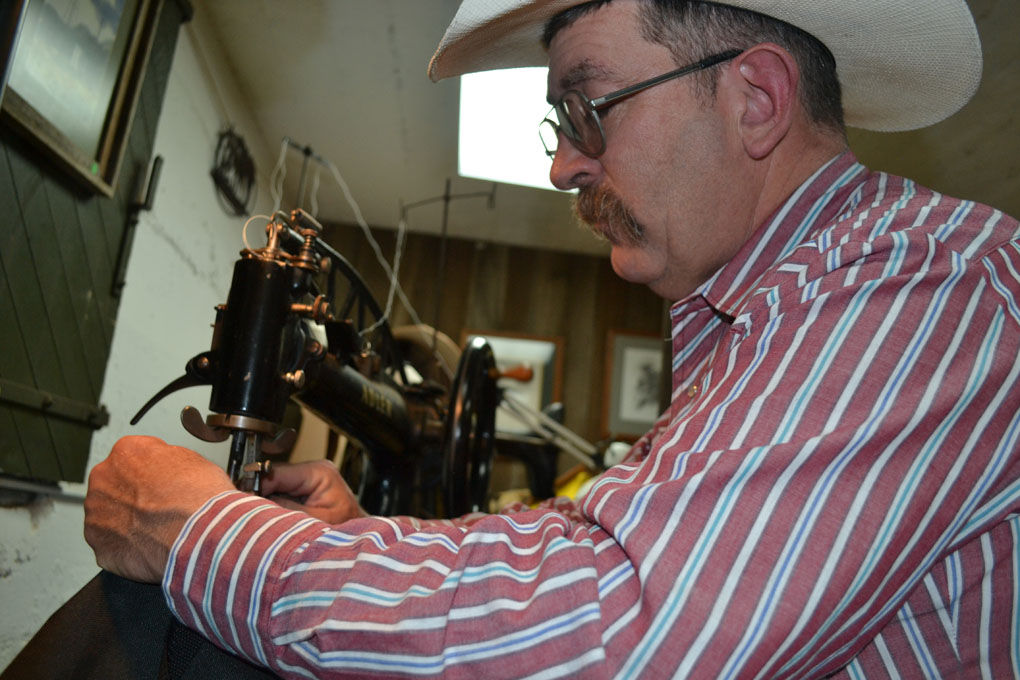 Bruce Brock works in his shop in the basement of Jim Bells and Son Western Wear, Cottonwood Falls, Kansas. Brock, a native of Chanute, Kan., began working with leather while working on a ranch in eastern Colorado.

The tinkle of a bell rings as the store’s door opens.

“He’s downstairs,” answers the girl at the register.

The steps to the basement are greeted by the aroma of tanned leather and boot polish. Here, a small workshop is filled with piles of leather, paintings, sketches, saddles, worn out boots and leather working tools. In the center of it all stands a middle-aged cowboy. His salt and pepper mustache wrinkles with a big smile and his eyes twinkle a hint of orneriness.

Since the time he could hold a pencil, Bruce Brock, a carpenter’s son, has been working with his hands. The Chanute, Kan., native could often be found sketching wildlife and western scenes as a kid.

In 1982, Brock packed up and headed to eastern Colorado to work on a ranch, a job that would begin his leather working career.

“It wasn’t to long after I started working there if something would break on my saddle I was sitting there going, ‘“How do I get it fixed?”’

The nearest saddle shop was 70 miles away and for a working cowboy, there wasn’t time to travel and wait on essential equipment to be fixed.

“The ranch Foreman had the philosophy, ‘“somebody put this together and I ought to be smarter than he is.”’ So I took that philosophy and started working on saddles,” Brock said. “I had a few books on how they come together. I just started taking them apart and putting them back together.”

While on the ranch, Brock was bunking in the cookhouse, which had a lot of shelves for canned goods in the basement. He had a cousin who worked in Wyoming who had dropped off leather, tools and some saddles to be stored in the cookhouse.

“He put them in the basement, which made me think, ‘“I hate to see all that stuff go to waste,’” So I built a work bench and started working with leather and building a saddle,” Brock stated. “And before I knew it I was building another saddle.”

It didn’t take long for word of his talent to spread and he had orders coming in for equipment repairs and custom products.

After seven years of working out west, Brock was ready to move closer to home and took a job working for TS Herefords and Quarter Horses, Cottonwood Falls. At the time he lived in Bazaar, where he befriended his neighbors, Randy and Cindy Peterson.

In 1992, he moved back to Chanute to help his dad with carpentry work, while coming back to the Cottonwood Falls area regularly to visit his friends.

Randy persistently worked on him to move back to Cottonwood Falls, always the first to let him know when a building became open in town, where he could open a shop.

Shortly after his dad began to think about retirement Brock decided carpentry work was not for him.

“I moved here in ‘96 and I felt like I knew everything I needed to know about saddles. I wondered, can I make a living, doing nothing but making saddles?” he said.

So Brock packed up and headed back west, this time for a week long apprenticeship at Miller Shoe Store in Lamar, Colorado, where he learned as much as he could about boot and shoe repair before heading back to Kansas.

“The Friday I left, I wound up buying some equipment from him and he assured me, “’Oh, you won’t have any trouble, if you do, call me.’”

“I think I had to call him twice,” Brock added.

“I like making chinks and I like working on saddles, the good ranch saddles. It is fun working on stuff you can tell is craftsman made,” he said. “I really enjoy repairing tack. Stuff is going to break, no matter who puts it together, especially in the ranching environment.”

His abilities are diverse in the products he can make — chinks, chaps, saddle bags, belts and wallets, just to name a few.

His,“If someone else can do it, I can too,” attitude has led him to work with different materials, the most interesting and challenging being New Zealand sheep wool.

A man brought him 10 New Zealand sheep skin hides to make blankets out of. After squaring them up, he had to figure out a way to glue and sew them together without damaging the material and making a long lasting hold.

“I took a 2x4 and rolled the wool back, clamped it down so I could run beaded glue and keep it off the white wool and glue the other one on and sew it,” he said.

According to Brock, the wool looked like thick, white hair. As he finished up the blankets that covered his entire work table, a man walked in.

“While visiting with me, he kept looking over at the blankets on the table. He said to me, ‘“I’ve got to ask you, is that Polar Bear?”’ Brock laughed.

While much of his time is spent working with leather, Brock admits he would like to work more with painting and sketches. He focuses on capturing working cowboys in action with his art.

“I’m not one to draw a picture with someone smiling at you,” he said.

Painting is something he is gradually getting more comfortable with. In 1995, he took a water color class  in Chanute. Since then he has branched out to acrylics and recently oil.

While he continues to develop skill with oil painting, Brock has successfully captured beautiful detail of life in the Flint Hills with his acry-lic and water color paintings.

The renaissance cowboy doesn’t stop at crafting with his skilled hands, Brock is also a cowboy poet and musician. He started writing cowboy poetry about a year and a half ago after his parents gave him a laptop.

“I just started writing about one of my experiences in Colorado and it came out poetry form. So I tried it again and now I’ve written 25-30 poems,” he said.

Brock’s poems are much like his paintings and sketches, capturing the life of cowboys he knows, whether it be funny mishaps or pondering the mysteries of life.

He can often be found at the Emma Chase in Cottonwood Falls, on Friday nights jamming with local musicians and performing cowboy music. His childhood of playing guitar to his newest challenge — the upright bass — has led him to start dabbling in song writing. Brock’s songs are much like his poems and hold a little humor about the struggles a cowboy can have.

Should you ever find yourself wondering down the bumpy, red brick street of downtown Cottonwood Falls, stop in Jim Bell & Son Western Wear and make your way to the basement. Even if you don’t need a custom pair of chaps or your boots resoled, take time to listen to one of Brock’s stories, you’ll be glad you did. £