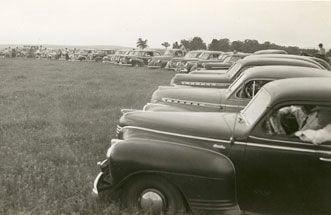 Back in the ‘40s, cars and trucks form a corral to encircle cattle featured on the tour. 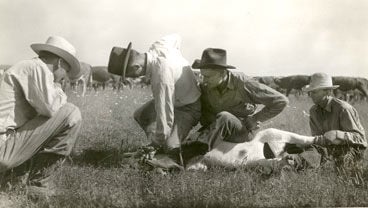 Things may have looked different on early Osage County ranch tours but cattle have always been the focus.

Back in the ‘40s, cars and trucks form a corral to encircle cattle featured on the tour.

Things may have looked different on early Osage County ranch tours but cattle have always been the focus.

But it’s real beginnings stretch back eight decades to a time when almost everything was different — except for the paramount importance of beef cattle in the Osage Hills.

Originally, the tour was a means of showing off Osage stockers to feeder-buyers from the Corn Belt.

They’d arrive by train, settle in at the Duncan Hotel and tour area herds, looking for long-tail cattle that would gain weight just looking at a bunk-full of corn.

“Back then, they were aged cattle and they’d gain fast,” explains Lee Holcomb whose grandfather came to Oklahoma in 1900. “Most were probably 2-year olds and some of them pretty long 2-year olds — they needed to go on feed.”

Holcomb, who was president of the Osage County Cattlemen’s Association in 1968 and 1969, wasn’t around for those early tours, although his father was involved in the ‘30s. He does have a vivid memory of the event going back to the late 1940s, however.

“A lot of cattle were sold during the tour and the convention,” he recalls. “The market didn’t move as quickly back then and it was a good way to show and market Osage cattle. We were still selling cattle that way through the ‘60s.”

Today, the tour and convention have evolved into another type of critter. Part social, part educational, the annual event is now — more than anything — a celebration of the cattle industry in a county that has been a leader since pioneer days.

“The whole complexion of the cattle industry in Osage County has changed, but what has not changed is its importance — this is still cattle country,” says Holcomb, whose partner in Cross Timbers Land, Jeff Henry, is the current president of the Osage County Cattlemen’s Association.

That organization is the oldest county group in Oklahoma — organized in 1934 — and pre-dates the Oklahoma Cattlemen’s Association.

Well before that, cattlemen driving herds north through Indian Territory took notice of the breathtaking ocean of native grass in the Osage and seized the opportunity to put weight on trail-weary Texas cattle.

The cattle ultimately brought the railroads and Blackland, northwest of Pawhuska, is said to have been the largest cattle off-loading and on-loading point in the country at one time.

Osage County’s grasslands became legendary. Texas cattle hitting the bluestem, cowboy talk had it, would double their weight in less than six months.

Some of those herds will be showcased during this year’s tour as a long caravan of trucks and cars snakes its way through the Osage.

Horseback ranch cowboys will have cattle bunched up along the road for viewing. Sometimes the vehicles enter a pasture and encircle a group of cattle.

Information about each ranch is broadcast by a local radio station so visitors don’t even have to get out of their vehicles.

It concludes with a barbecue lunch at the fairgrounds.

The tour, however, is just one part of a weekend packed with activities, including the prestigious Ben Johnson Memorial Steer Roping, which brings the nation’s elite cowboys to Pawhuska.

In addition to the tour, Saturday events include:

Activities conclude with an open-air Western dance after the steer roping.