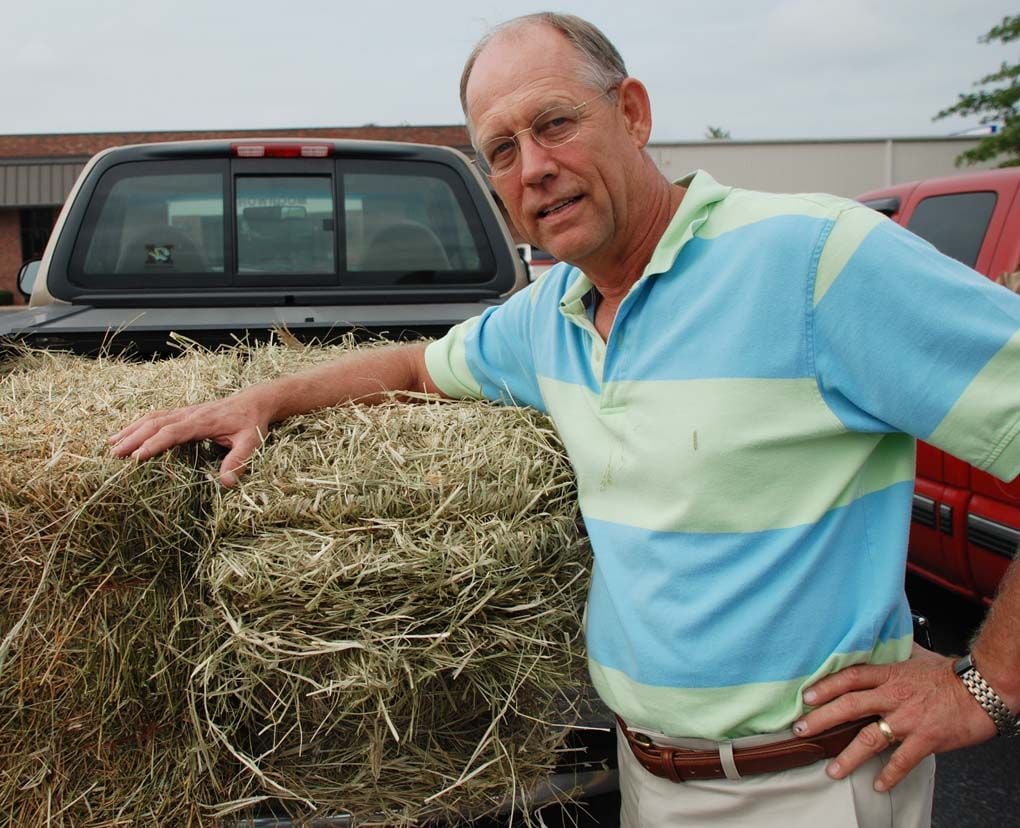 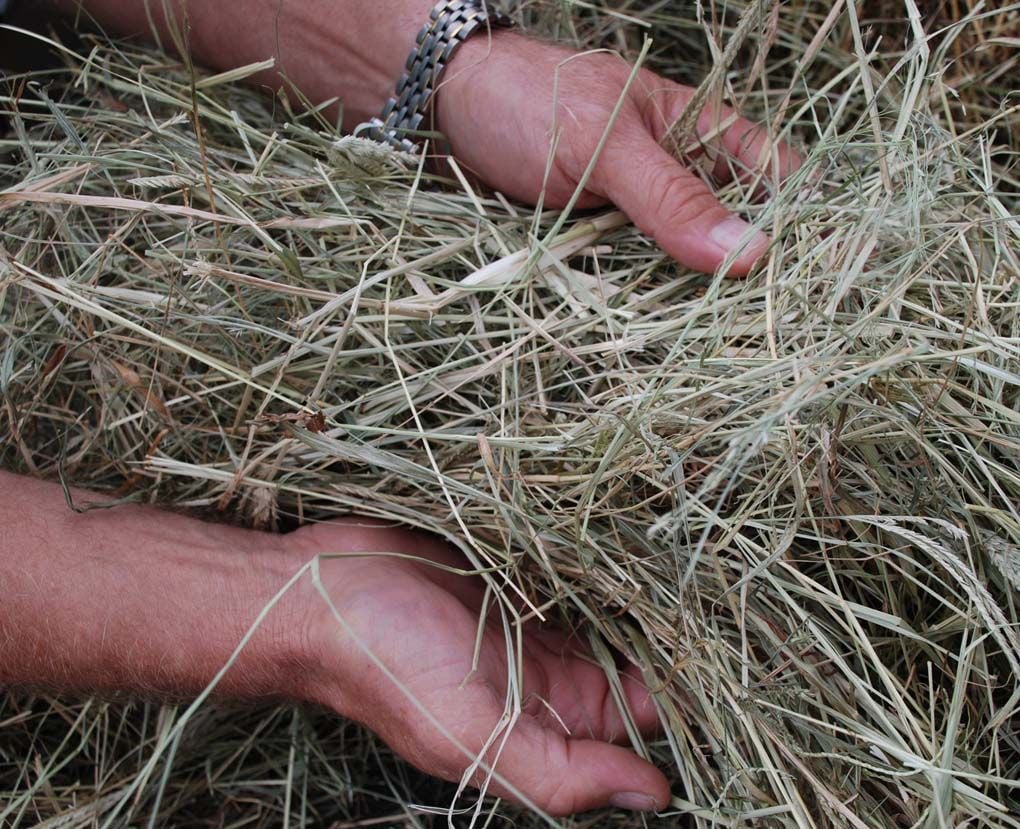 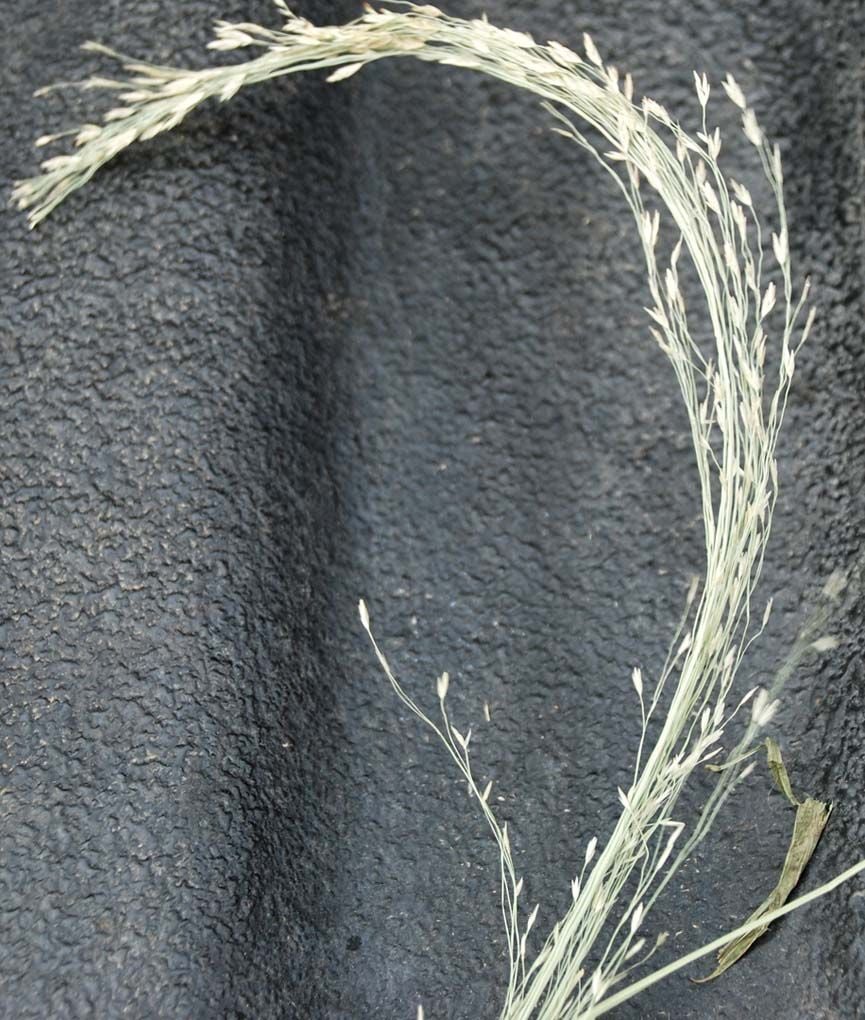 They call alfalfa the “queen of forages” but sometimes its reign doesn’t last as long as hay producers would like. That was the problem Chris and Georgia Douglas faced in their Sparta, Mo., commercial hay operation. They found a solution in “teff,” a warm season grass that originated in Africa. Teff, a fine-stemmed annual, is interseeded in alfalfa fields as the stand begins to thin out, propping up production and providing customers of Meadowlark Ridge Farms with a quality product. And because it is an annual, Chris and Georgia are able to spray for weeds after the last cutting of the year and again in February to control invaders such as plantain that hurry stand loss. “Getting the opportunity to work on weed problems in the off-season is a big benefit but I also like the fact that the teff really comes on later in the summer when alfalfa growth slows down,” Chris explains. “This year was cooler and wetter than normal and it really didn’t do quite as well as it has but most years hot and dry is a better bet around here and that’s where the teff really excels.” Of course those attributes wouldn’t be worth much if the final product wasn’t desirable to customers but that has not been a problem. “We actually had some customers express an interest in an alfalfa-grass mix hay,” Chris notes, pointing out that many of his clients are horse owners. “Teff is often compared to Timothy because it’s so fine-stemmed palatable. Our customers seem to really like it.” Teff is very susceptible to frost so Douglas waits until after the first alfalfa cutting, in May, to seed the grass. In the operation, which strives for five cuttings, there won’t be much teff present in the second cutting harvest but there will be a significant amount in the third. The fourth and, hopefully, fifth cuttings will have the largest teff content. “I won’t put it (teff) in a new alfalfa stand because alfalfa is still the main priority,” he emphasizes. “We want to make sure a new stand of alfalfa is as productive as possible because that’s still where the best market is. “As the stand begins to thin, though, in that fourth or fifth year, we’ll start interseeding the teff to extend the productive life of the alfalfa. We have a progressive reseeding program and, when we judge that the alfalfa stand is too thin, we’ll kill it off, sow winter wheat which we’ll hay in late April, and then go back to alfalfa.” Although he initially used the teff variety Brown, Douglas has settled on Tiffany Teff, because the seed is coated which makes the seed larger and far easier to get planted accurately than uncoated seed which has approximately 1.3 million seeds per pound. The planting rate will vary according to the quality of the alfalfa stand. Ideally, he’s aiming for hay that’s 75 percent alfalfa and 25 percent teff in the bale because that’s the mix his customers seem to prefer. In a pure stand, the recommended planting rate is 8-12 pounds of coated seed. Douglas interseeds teff at a rate of 4-5 pounds per acre. Price of the seed varies according to quantity but is currently priced at roughly $4 per pound for a 50-pound quantity. Douglas utilizes a Haybuster 107 no-till drill and plants the seed as shallow as possible—1/4 inch or less. The Douglas hay enterprise is a true husband-wife partnership with Georgia, who grew up in Springfield and does not have a farm background, doing all of the mowing and raking. The family roots in the hay business, however, go deeper. Chris’ father, Leonard Douglas, retired as vice provost for University of Missouri Extension after serving in county agent posts all over the state—including Lawrence and Bates counties. “Dad and Mom retired to the farm at Sparta in the mid-‘80s and he was one of the first people in the area to raise hay commercially,” Chris says. “Dad always thought outside the box and enjoyed looking at new things. After Georgia and I took over the farm, Dad gave me an article about teff and suggested that I check it out—that was the first time I had ever heard of it.” After retiring from the Navy, Chris went to work for Harry Cooper Supply in Springfield. Eventually, he and Georgia bought his parents’ farm and set to work getting the family hay operation back in gear. “We try to look at how we can improve production and best meet the needs of our customers within the constraints of our land,” Chris explains. “Teff has fit those criteria pretty well.” Meadowlark Ridge Farms merchandises most of its hay within a 40-mile radius of Sparta. About 80 percent is picked up out of the field by customers but, with the help of what Chris calls a “great group of young men,” the operation also delivers. The classic customer is someone with two or three horses but the clientele is varied and purchases range from a single bale to several hundred bales at a time. Chris and Georgia put out a newsletter to existing customers to let them know when hay will be cut and what the price will be. “We try to set the price at the start of the season and stay with it,” Chris observes. “This year we were forced to adjust the price because of the increase in the price of petroleum products. Our fertilizer costs have tripled in the past two years and, of course, diesel has also gone up dramatically.” Despite the challenges, though, Chris and Georgia enjoy the hay business and gain satisfaction enhancing the productivity of their corner of the Ozarks. “It’s a labor of love,” Chris asserts. “Sometimes we run out of time and that can be frustrating but we do it because we absolutely love doing it.”