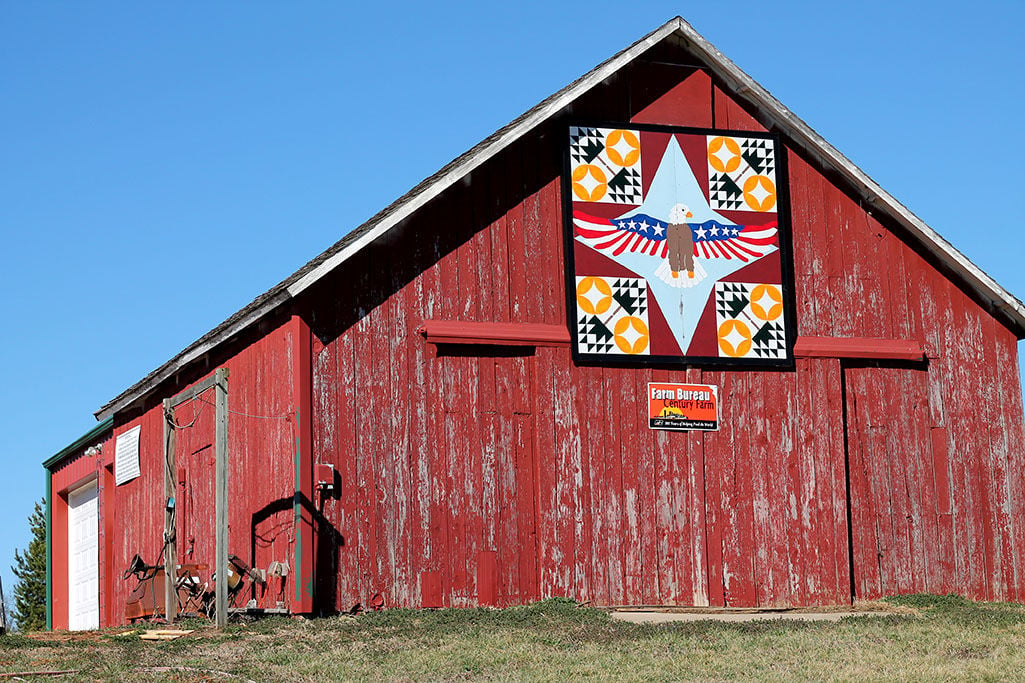 Quilt block No. 14 on the Peckham barn at Pleasant Ridge near Rantoul, Kansas. 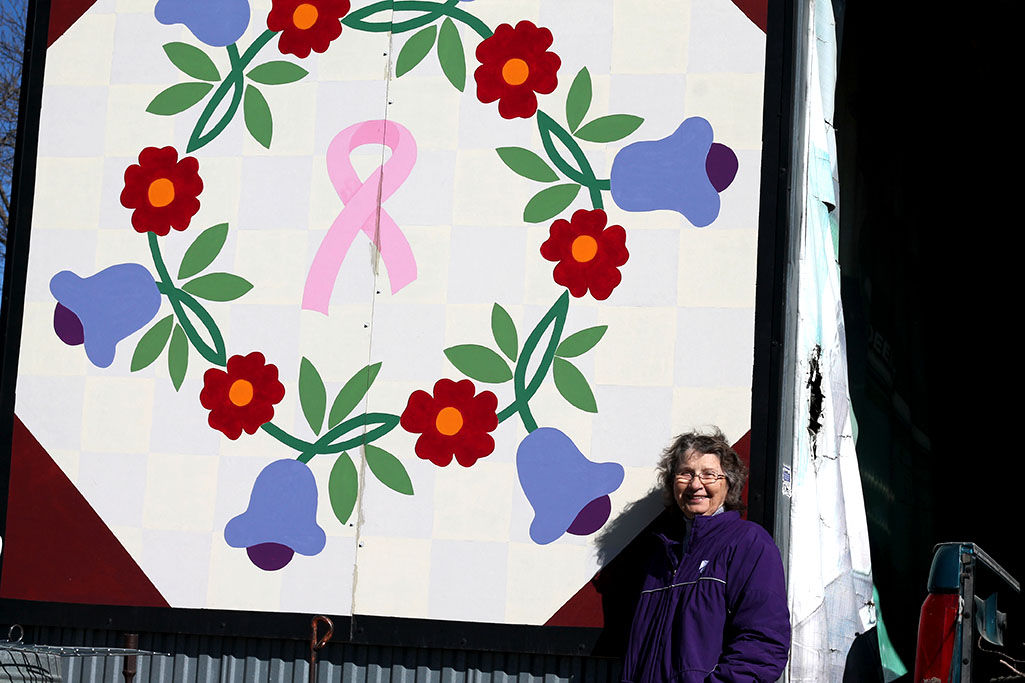 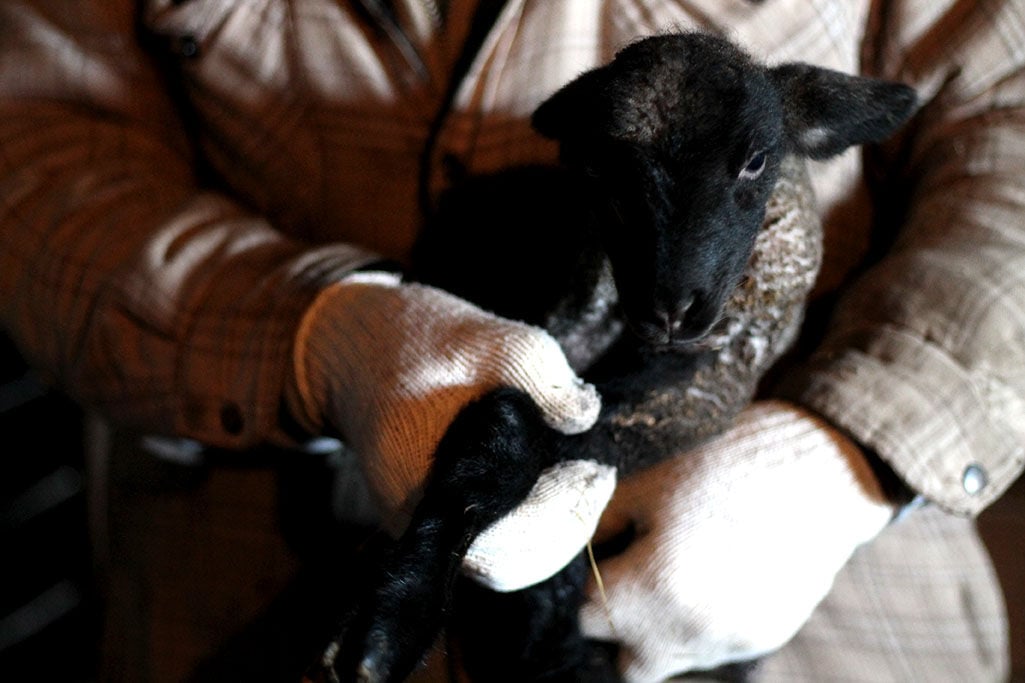 Tom Chambers shows off their first lamb of the season. 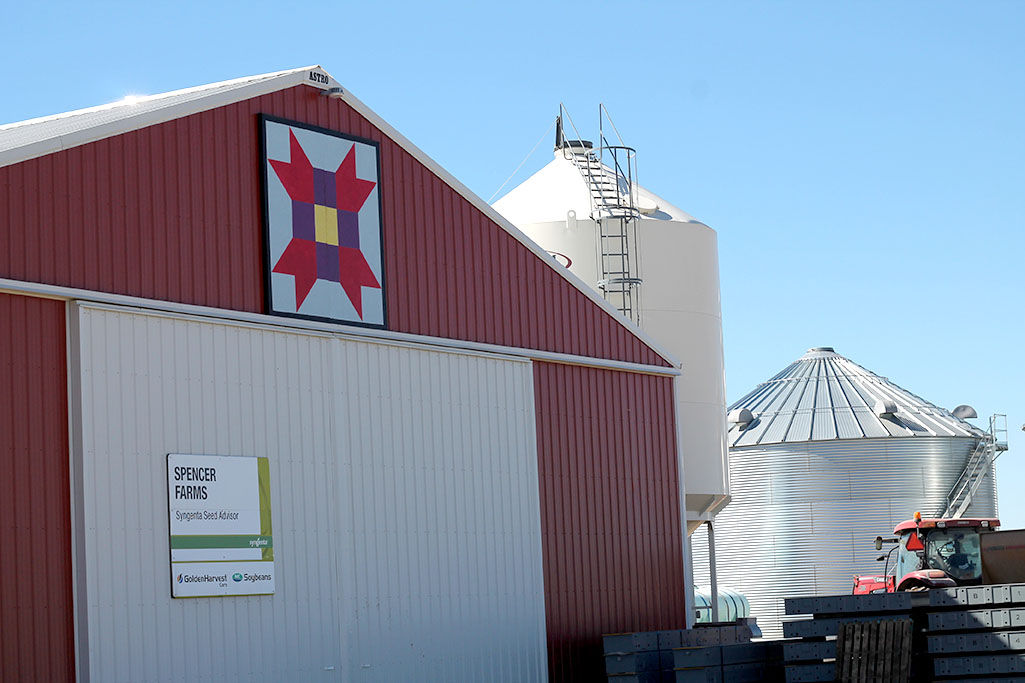 Quilt block No. 35 is called the “Farmer’s Daughter” block for Lucille Spencer at Spencer Farms.

Quilt block No. 14 on the Peckham barn at Pleasant Ridge near Rantoul, Kansas.

Tom Chambers shows off their first lamb of the season.

Quilt block No. 35 is called the “Farmer’s Daughter” block for Lucille Spencer at Spencer Farms.

It’s all about a respect for tradition, an emphasis on family ties, a dedication to community, a high regard for agricultural pursuits — rural virtues.

In an effort to preserve their community’s rural values and share a way of life, the Franklin County Quilt Block trail was born.

The first county-wide organized quilt block trail of its kind, the Franklin County Quilt Block Trail includes more than 50 barns, each with its own unique story and quilt design. Travelers from across the United States and closer to home have come to take the trail, meet area farmers and admire the county’s industries, all while contributing to local commerce.

The tour could not be successful without a diverse group of farmers, ranchers and business owners to keep people coming back. With each beautiful quilt square and barn comes a unique story and, in this case, the stories are worth the trip.

The Chambers’ quilt block is a feminine circle of blue bell-shaped flowers, tiny red blooms and green vines, but the essential piece of the block is the pink ribbon, front and center. Beth Chambers, matriarch of the Chambers farm and inspiration for the block, was diagnosed with breast cancer at only 29 years old.

“The doctors told me I was far too young to get breast cancer, but I survived because we caught it early,” Beth said. “We decided to incorporate the ribbon in our design to help make others aware that early detection saves lives like mine.”

Beth and her husband, Tom Chambers, bought their farm in 1959 and cultivated a thriving sheep operation with over 100 ewes and a large 4-H auction each year for project lambs. Now retired and running only 20 ewes, the Chambers continue to share their love of their livestock with the community.

“If we see someone driving by very slow to see the quilt block, we typically try to come out and talk to them about the farm,” Beth said. “The farthest away people have driven is California so far, and we like to make them feel welcome.”

The Chambers’ quilt block is No. 12 on the tour, making their block one of the first to join the trail almost six years ago. Today, the Chambers are still glad they did.

“We think this is just wonderful for the community,” Beth said. “It has brought people to our county who would never have come before, and it has also helped the stores and restaurants in the area as well.”

The Van Horn quilt block, a simple sunflower design, at a house that lies empty now has a resonance with Beth Chambers. The now-deceased matriarch of the Van Horn clan raised her kids with Beth Chambers and, for her and everyone else in the area, the square serves as a memorial to her love of Kansas and dedication to the farm.

Avid quilter Melanie Brungardt, just a short drive down the road, eventually picked an elaborate 3-D quilt design for her block. With ornate quilts all over her home, in themes from Van Gogh to Kansas sunflowers, choosing just one square was a challenge.

The Brungardt quilt square faces the road on the family’s ten-acre farm, a concerning location for Melanie’s husband. Being a local law enforcement officer, Melanie’s husband was uneasy at first with listing their home address for the public but after a few passersby stopped to chat, those fears were negated.

“At first the kids would run in saying people were outside and it was concerning,” Melanie said. “Then we started talking to all the people driving by to look at the square and it became one our favorite parts of being on the tour.”

Having a quilt block of their own has made the Brungardt family more aware of other farms and businesses in the county as well, often driving around to see the frequent new additions to the tour.

“Driving to see the other squares is one of our favorite pastimes,” Melanie said. “It takes a long time to see all of the squares at once but it’s a very worthwhile trip.”

Melanie’s favorite quilt block on the tour is the Peckham square at Pleasant Ridge.

Owned by Harry and Juanita Peckham, the quilt block is situated at their pumpkin patch and Christmas tree farm, Pleasant Ridge. A portion of the farm has the Farm Bureau Century Farm distinction, as Harry’s grandfather, Harry Edward Peckham, originally homesteaded it in 1914.

Resourcefulness and a commitment to community dominate the landscape at Pleasant Ridge, named after the one-room schoolhouse Harry attended up the road. The Peckhams purchased their main farm, about a mile away from their homestead, in the ‘80s and when the market crashed soon after, they searched for creative alternatives to traditional farming and found pumpkins and Christmas trees.

“My wife and I complement each other very well,” Harry said. “When we started this operation she promised me anything I could grow, she would sell. It’s worked out that way ever since.”

The Peckhams also grow roughly 1,000 acres of corn, soybeans, wheat and hay, but the seasonal attractions are where their commitment to community really shines.

“People come from all over to experience this with us each year,” Harry said. “Every year we try to make things just a little bit better for them.”

Harry discovered he could make a hay maze while stacking their hay one year, and after the pumpkin patch succeeded they added the Christmas trees, which take seven years to mature, on faith.

The Peckham quilt block reflects all of their various interests in symbolism— orange pumpkin seeds, fir boughs and an eagle that was painted on the original barn dominate the design.

Lucille Spencer, self-proclaimed farmer’s daughter and Ottawa Visitor’s Center volunteer, guided this quilt block tour and her family’s three-generation operation was the final stop. The quilt blocks are named “Farmer’s Daughter” for Lucille and “Farmer’s Wife” for her daughter-in-law.

Beginning with just 40 acres in 1972, Spencer Farms now encompasses over 8,000 acres of farming operation, a seed dealership, chemical dealership, grain elevator, over 300 head of cattle and much more. Ron and Lucille bought the original farm when he was still teaching agriculture at a local high school, and their son, Kevin, now the general manager, was working at a grocery store.

When Ron retired, he and Kevin decided they would make farming their livelihood and expanded the business to accommodate two families. When Kevin’s sons Aaron and Brad, wanted to come home to the family business, expansion was necessary again, as the family grew, the farm did also.

“Our mantra became ‘Never say no,’” Kevin said. “Whenever a customer asked if we could custom farm, or do dirt work, or source seed for them, we never said no, and now we have a direct link to almost every aspect of farming.”

The quilt simple squares are dedicated to the women of the operation for their diligence, understanding and love.

“Our wives are our everything,” Kevin said. “This operation would be nothing without their willingness to support us, raise our children, work jobs off the farm, and still be willing to meet us with love at the end of the day.”

The Spencer quilt block brings the tour full circle, and Lucille, the Spencer matriarch, is a good example of the point of the tour itself. Engaging community, driving commerce, respecting an agricultural way of life, and being willing to open up their homes and  hearts to outsiders in order to understand and be understood. Franklin County, Kansas, is an unlikely beacon for drawing in the world outside such a dedicated and warm rural community, but its farm families have accomplished an openness few communities can mirror. £