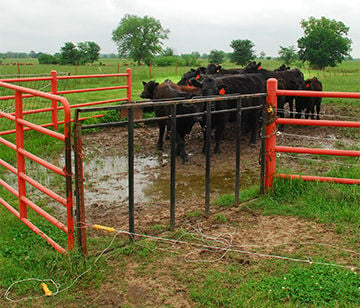 Creep grazing and using teff as a drought forage were two of the topics at the Eastern Research Station field day near Haskell, Oklahoma. 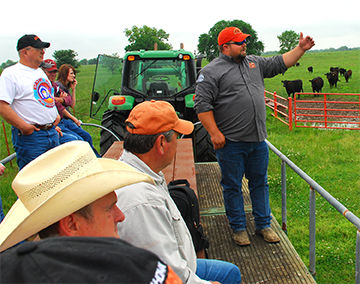 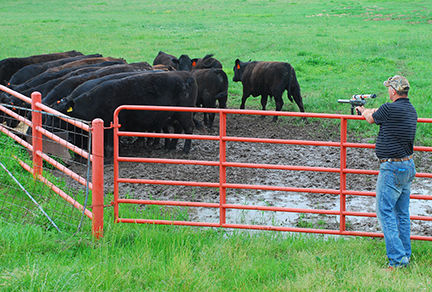 Creep grazing and using teff as a drought forage were two of the topics at the Eastern Research Station field day near Haskell, Oklahoma.

Oklahoma State University opened the gates to its Eastern Research Station near Haskell recently to deliver beef cattle information to use today — and to consider down the road.

Creep-grazing calves and using teff as an emergency drought forage are practices beef producers may be looking at in the future but, right now, they have flies to deal with.

Conditions are prime for an onslaught of horn flies this summer, Talley told the cattlemen, adding that keeping levels below 200 per head on growing animals can result in an additional 1.5 pounds of average daily gain.

Ear tags can be an effective solution, he said, but producers need to be aware of resistance issues and rotate the products they use.

“You can get cheap tags but you’re going to get what you pay for,” he added.

Dust bags can also be effective but it can be difficult to get every animal to go under the bags every day.

The Vet Gun, a CO2-powered paintball-type gun that shoots an insecticide “ball,” can also be effective in some situations, he said. He advised using the gun when cows are gathered eating supplement to better track treated animals.

Oklahoma cattlemen face two tick species that can cause significant problems. The Gulf Coast tick attacks the ears of cattle and can be controlled with a pyrethroid ear tag — or pyrethroid spray if animals are gathered.

Lone Star ticks are normally lower on the animal’s body so an insecticide spray solution or dusting is required for control.

Internally, several species of roundworms are the top target for control but that’s not easy, Talley said. The brown stomach worm, for instance, infests the animal’s stomach, penetrating the lining, but can become dormant in hot, dry conditions.

Talley urged producers to develop an “outside the cow” strategy for limiting worms in the pasture. In small traps, he said, it may be beneficial to drag manure piles or burn forage in the early spring.

For young cattle, a good strategy is to place them — or any other susceptible animals — in a “parasite safe” pasture, which was not fall-grazed.

He noted that cold and dry weather can reduce survivability but added, “It’s never cold enough in Oklahoma to kill the parasites.”

Recommending that producers work with their veterinarians to target the most problematic types, Talley outlined programs for cow-calf and weanling herds:

•Treatment 1: Spring (Feb. through May) Treat cows and calves over 200 pounds (2 months) with either Ivomec or Cydectin injectable.

•Treatment 2: Fall (Sept. through Nov.) Treat cows and weaned calves with a white dewormer such as Synanthis, Safe-Guard, Panacur and Calbazen.

•Treatment 1: Weaning (or upon receiving) Treat with either Ivomec or Cydectin injectable.

More information on parasite control is available at livestock bugs.okstate.edu.

In the trial’s first year, Ward and Brian Pugh, OSU northeast area agronomist, planted a 2.2-acre plot to cereal rye in spring and installed a creep gate to allow access to calves only.

At day 80, the creep-graze calves had put on 46 pounds per head more than control calves with no creep access. Their dams lost 58 pounds per head less than the control mothers.

In the trial’s second year, the OSU scientists upped the forage bank with oats and turnips, in addition to the cereal rye, and increased the nitrogen application.

“That produced a lot more forage than the calves could utilize so when growth got heavy, we turned the cows in every three days for about a month, which allowed us to not feed a supplement,” Ward said.

“We learned some lessons but I think this would be beneficial in some situations,” Ward said. “I think we need to focus more on the last 70-90 days prior to weaning when the calves are relying more on forage for their nutrition.”

OSU Northeast Area Agronomist Brian Pugh has been looking at teff as a potential drought mitigating forage for Oklahoma.

The annual grass, which originated in Africa where it’s used to produce flour, has tremendous growth under hot, dry conditions, as well as very high quality, Pugh noted.

Teff is not, however, tolerant of frost nor does it tolerate grazing well, especially when small, he said.

Pugh seeded Tiffany Teff at a rate of 5 pounds of pure live seed (9 pounds actual of the coated product) in early May. The seed, which is extremely small, was broadcast on top of the ground with a drill in a well-prepared seedbed. No nitrogen was applied since the planting followed alfalfa.

After harvesting the first cutting, nitrogen was applied in mid-July for regrowth. In two harvests, teff receiving 50 pounds of nitrogen twice produced 8,845 pounds of forage per acre. When the mid-season N application was bumped up to 100 pounds, total season production was 10,168 pounds per acre.

Pugh advised not mowing teff lower than three inches and noted that while teff may not be as productive as some sorghum-sudans, it has no nitrate issues.

He suggested following bermudagrass soil test recommendations and planting where the soil is visible.

“I think it could be viable for us during drought as an emergency forage and it might be useful for an after-wheat hay crop,” he said. “It could also be grown for a high-quality hay market or as a transition crop for fescue renovation.”

The field day was sponsored by Farm Credit of East Central Oklahoma and the Muskogee County Cattlemen’s Association. £