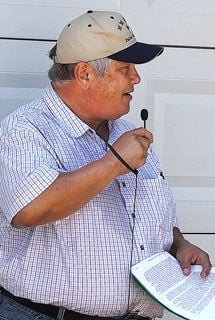 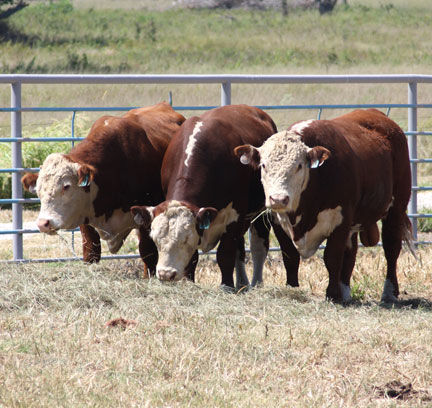 Some M-M Ranch bulls on the Kansas Hereford Tour.

Some M-M Ranch bulls on the Kansas Hereford Tour.

The Chanute, Kan., Polled Hereford operation’s beginnings go back to 1964 when Alexander  W. S. and Mariam Mih invested in six good cows and a good bull.

The numbers have grown dramatically since then — up to more than 1,200 head of registered cattle —but the truly important numbers are the ones that chart the herd’s progress and determine its direction.

“Going back to the ‘70s, the herd has taken advantage of performance testing but for the past 15 years or so, we’ve been extremely focused,” explains Alex Mih who, along with his mother, continued the operation when his father passed away in 1991. “We are dedicated to the measurement and testing of all phases of the production cycle — from birth weight to the accumulation of carcass data.”

Over the past few years, M-M has gathered carcass information on more than 1,800 head of fed cattle with 82 percent of the purebred Herefords grading choice. Bulls are also tracked and performance-tested but it is the female side of the equation that really sets the M-M program apart.

Although selected for economically important traits since the herd was founded, all replacement females — and bulls — have been evaluated for Residual Feed Intake (RFI) at Green Springs Bull Test at Nevada, Mo. since 2007. Basically, RFI identifies cattle that gain and grow more efficiently, consuming less feed to achieve the same gain as their less efficient counterparts. The trait is regarded as similar to carcass traits in terms of heritability so more efficient dams and sire should produce more efficient progeny.

Differences from one animal to another can be dramatic — 15-20 percent less feed consumed to achieve the same or greater daily gain.

“It comes down to profitability and RFI allows us to influence our input costs — which is important to ourselves and to our customers,” Mih explains. “We feel that having this information is pretty important, especially when you consider that you’re going to have a female in your herd for nine or 10 years.

“We have enjoyed a great partnership with Kent and Kathy Abele of Green Springs Bull Test who have fed the cattle and collected the data. Dr. Monty Kerley of the University of Missouri has been a fantastic friend and mentor to us over the years. Without all of these great people it would be impossible to make progress in this area.”

The heifers that go back into the M-M herd, which was featured in last summer’s Kansas Hereford Tour, must be superior in terms of RFI as well as other performance traits. All females seven years of age and under have been tested and the ranch now has multi-generational RFI data. That adds up to over  900 cows selected for feed efficiency in addition to  the more commonly measured traits in what may be the most extensively RFI-tested herd in the country.

And it’s paying off, Mih says. “We’ve seen the benefits in the feedlot closeouts,” he notes. “Our feed conversion has improved. In 2008 our dry matter conversion was 5.55 to 1, in 2013 it was 4.86 to one. We’re excited about the potential. This allows us to select for a better feed-to-gain ratio in our cattle without selecting for increased mature cow size.”

Mih acknowledges that it’s critical to keep trait selection balanced. Calving ease is all-important, he emphasizes, but so are growth, carcass quality and maternal traits. And even though some of those traits can be somewhat antagonistic, it’s possible to identify bulls and females that rank high in the areas most important to commercial beef producers.

M-M’s herd sires have been chosen for elite performance traits and the ranch also AIs about 200 or more cows each year. Embryo transplant has also been utilized.

The cowherd is largely based on genetics from Vescovi Polled Herefords of Montana and the Frank Felton herd of Missouri. Additional herd sires have come from Knoll Crest Farm in Virginia, Ellis Farms of Illinois and Gerber Polled Herefords of Indiana. Recently the ranch has brought in outcross genetics from CK Ranch of Brookville, Kan., and the Journagan Ranch of Missouri.

Most bulls and females are sold at private treaty going to herds in Kansas, Oklahoma, Arkansas and Missouri.

“Our Ranch Manager Doug Pearish, who has been with us for almost 15 years, and Dale Beecher make all of this happen for us. They have great cattle skills and knowledge. It would not be possible to get all of this done without their efforts.”

The ranch team also includes his wife, Alison, and mother, Mariam, who still enjoys seeing the cattle regularly. Although they’re planning to move back to the area soon, Alex and Alison currently live in Indianapolis, where Alex is a board certified orthopaedic surgeon and an associate professor of orthopaedic surgery at the Indiana School of Medicine.

It is, perhaps, the scientific training grounded by a ranching heritage that influences M-M’s data-driven, performance-proven approach and the belief that, when the numbers are right, they add up in the profit column for ranch customers.

“The data dictates the bulls we use and the cows we keep but we pride ourselves on providing our customers with bulls and females we’d be proud to use ourselves,” Mih concludes.