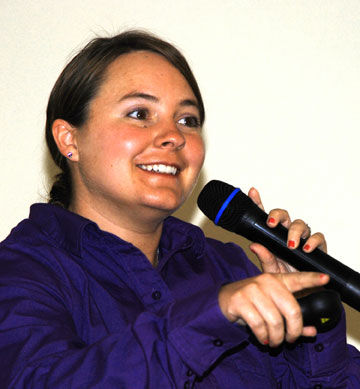 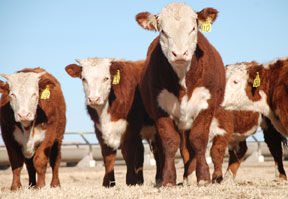 Heifers that hit the right target numbers have a better shot at being profitable additions to the cowherd, Jaymelynn Farney told beef producers at the recent Southeast Agricultural Research Center Beef Cattle and Forage Field Day in Mound City, Kan.

The K-State area Extension beef specialist noted that, traditionally, having replacement heifers achieve 60 to 65 percent of their mature weight by breeding time has been the gold standard.

Higher feed costs, however, have driven an interest in getting heifers bred sooner, at lighter weights.

And while there has been success in breeding replacement heifers at 50 percent of mature weight, Farney said producers should consider their individual situations — and their heifers.

A number of factors can help dictate optimum percent of mature weight at breeding, including:

•Ability to retain ownership of heifer in feedlot

The animal scientist cautioned, however, that the lighter heifers had a 60-day breeding period while the heavier group had 45 days.

Additionally, the lighter heifers tended to wean lighter calves — about 11 pounds less than those from the heavier group.

“It’s going to depend on your situation but it may be worth spending some extra dollars raising the nutrition level in order to minimize the risk of open heifers,” Farney said.

She also discussed studies conducted in Arkansas and elsewhere that compared different growth patterns of gain by utilizing nutritional level to have a slower growth period followed by a more rapid growth period.

Several studies found no difference in settling heifers in such studies, she said.

“Ending up at 60 percent of mature body weight — that’s what’s important,” Farney stressed. “The roads you choose to get there can vary but you have to hit that goal.”

She did caution that a diet that includes too much degradable protein can increase serum urea nitrogen and reduce pregnancy rates.

“It’s important to keep them gaining,” she said. “But take care making diet changes — you want a smooth transition. If you kick them out on lush grass, for example, they may not be able to consume enough to maintain their weight — they can actually go backwards.

“Don’t do immediate changes. Going to grass you may need to provide a supplement for the first week or so.”

Farney noted that heifers need adequate energy for the first month of pregnancy, pointing out that it takes approximately 30 days for the embryo to become implanted.

She added that heifers should achieve 85 percent of nature weight at the time of their first calving and total mature weight with their second calf.

And while achieving weight goals is important, it’s just as important to monitor body condition.