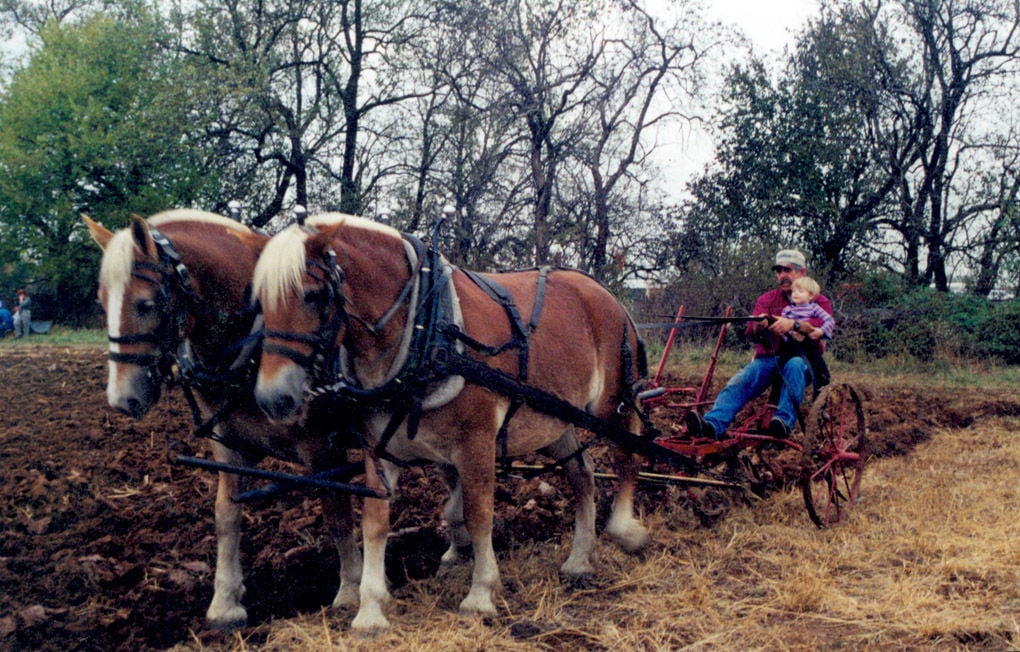 Jack and his granddaughter Jessica plowing with Dan and Babe. 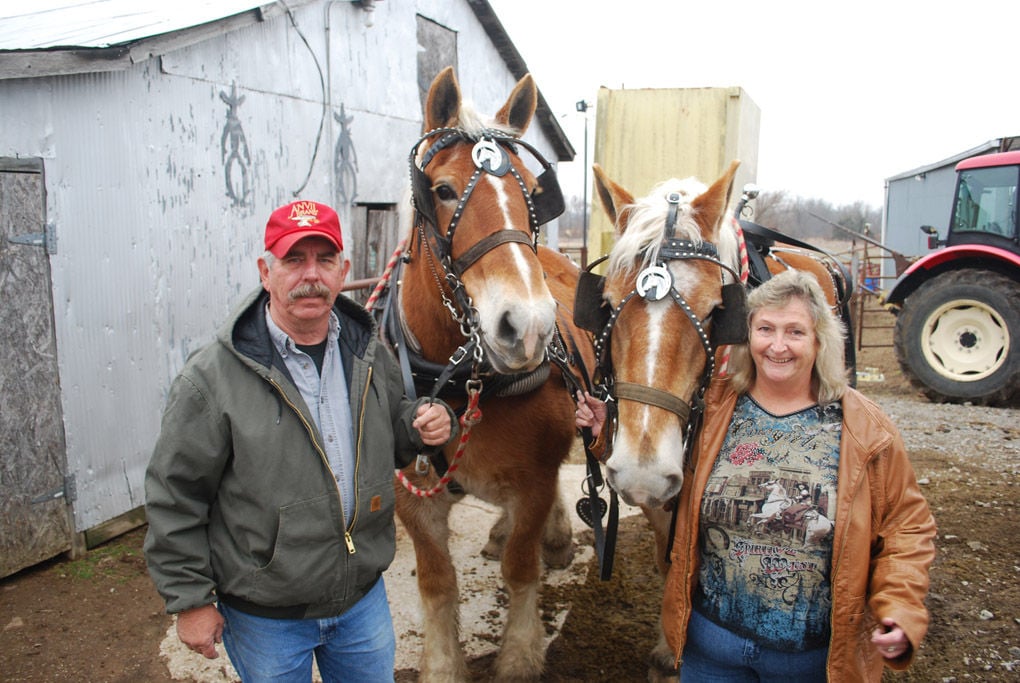 Jack and Verna Cossairt are pictured with one of their Belgian teams, Mickie and Daisy.

Jack and his granddaughter Jessica plowing with Dan and Babe.

Jack and Verna Cossairt are pictured with one of their Belgian teams, Mickie and Daisy.

What started out as an opportunity to quit a bad habit turned into a much more addictive one for Columbus, Kansas draft horse owner Jack Cossairt.

It was a trip to a “Smoke Stoppers” clinic that coerced Cossairt into purchasing his first pair of Belgians.

“Some guys from work and I went to this clinic and the instructor told us to keep spending the money that we had been spending on cigarettes, or just put it in  a jar and save it,” Cossairt explains. “So, I put the money in the jar until I decided to buy a pair of draft horses in 1988.

Now, some 23 years later, Cossairt has yet to pick up another cigarette, however, he has bought, sold a lot of draft horses.

From Quarter Horses to Percherons to Belgians, Cossairt and his wife, Verna, have owned their fair share of horses. It is the gentle giants, though, that the Cossairts know as Belgians that formed yet another habit for the Columbus family.

“The first team I bought was a team of Belgians so that is just what we have had mostly,” he says.

According to him, Belgians are the biggest-boned draft horses.

“They claim that Belgians are born broke and I would almost believe that from the experience that I’ve had with them,”he explains. “They are very calm for all the noise that is going on behind them.”

Although the love for draft horses was habit forming for Cossairt, it didn’t stop at just ownership.

“I use these horses for all kinds of things around the farm,” Cossairt explains.

From plowing to pulling a harrow or planting, it isn’t uncommon to see a team hitched to some sort of horse-drawn equipment at the Cossairt farm.

“I enjoy working on and restoring old equipment and everyone that knows anything about working horses is always helping me to know more about the draft horse industry,” Cossairt says.

According to him, when they first got their team, older folks were always willing to help by giving ideas of how to do certain things and how not to do others.

“I had no experience with working horses so I always enjoyed listening to the advice that was given to me by those who had grown up working behind teams of horses,” he says.

“Making sure that your horses are standing still when you are hooking them up is extremely important,” he says. “You have to make sure you aren’t straddling anything and that you don’t have your hands or fingers wrapped up in anything in case the horses should happen to jump.”

When Cossairt and his team aren’t working on their own farm, there are plenty of events to attend.

“We do our own plowing here at the farm, which we have done for several years,” he explains.

As a matter of fact, they have had as many as 16 teams of horses and over 125 people attend the plowing event they host.

“Plowing is really my favorite thing to do with my team,” Cossairt says. “It’s the sound that gets me, that 14” single-bottom plow sounds like a zipper going through the ground.”

And when he isn’t working the ground with his horses Cossairt is often asked to take part in community activities.

“We’ve done all kinds of things with our horses. From wagon rides to parades. We’ve even taken kids to prom,” he explains.

However, one of the most memorable uses Cossairt recalls with his horses is having the honor of taking old friends to their final resting place.

“I have had the honor of being in a couple funerals for old friends,” he says. “The really neat part of that is that they were older men that taught me a lot of what I know today about draft horses.”

Cossairt wouldn’t be where he is today without the help and the knowledge many people gave freely gave him. In return, he tries to give that knowledge back.

“We have taught all our kids and grandkids how to lead and how to work our horses,” Cossairt says. “We do our best to keep the heritage alive in our family.”

“It is fun to watch the kids as they look up at the horses,” he says. “They’ve never seen horses that big and they had no idea they could be used to farm with.”

In this ever-changing, fast-paced world, it is easy to get caught up in what is new and different, or what is bigger and better.

That’s not the case for Cossairt. Give him a good team and some ground to break and he is content.