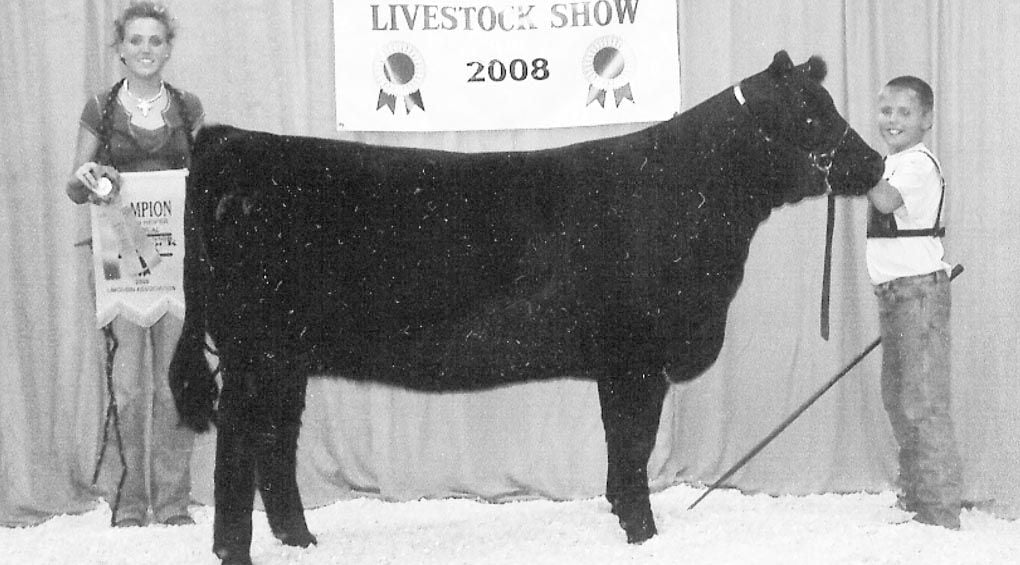 Chase Ratliff, age 10, holds the halter for his Supreme Champion heifer Treasure at the Kansas Junior Livestock Show in Wichita in 2008. His sister Morgan holds the purple ribbon. 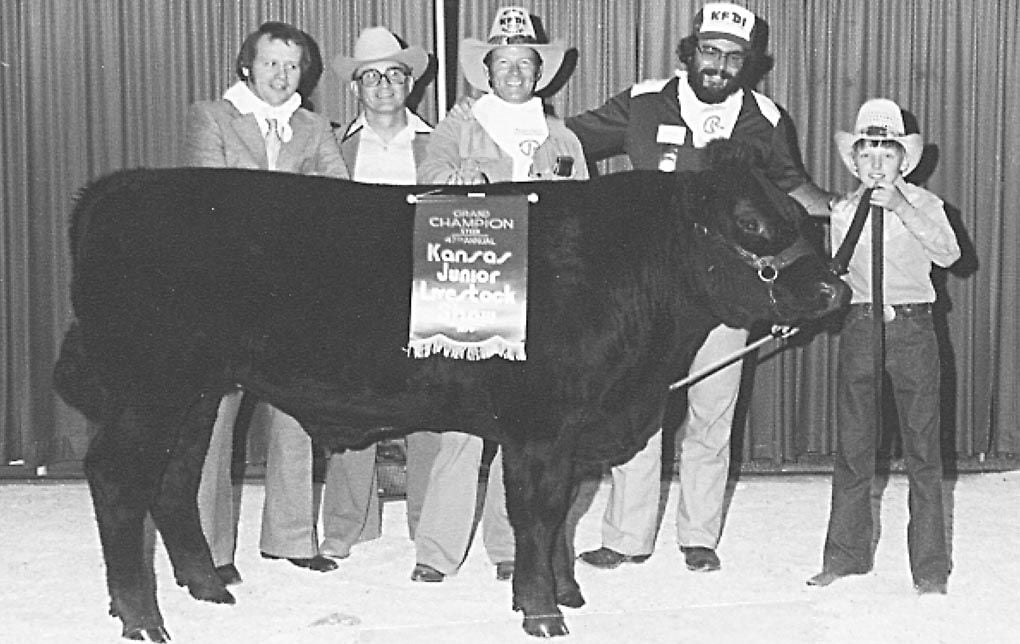 David Ratliff, age 13, holds the halter for his Supreme Champion Maine-Anjou crossbred steer at the Kansas Junior Livestock Show in Wichita in 1979. 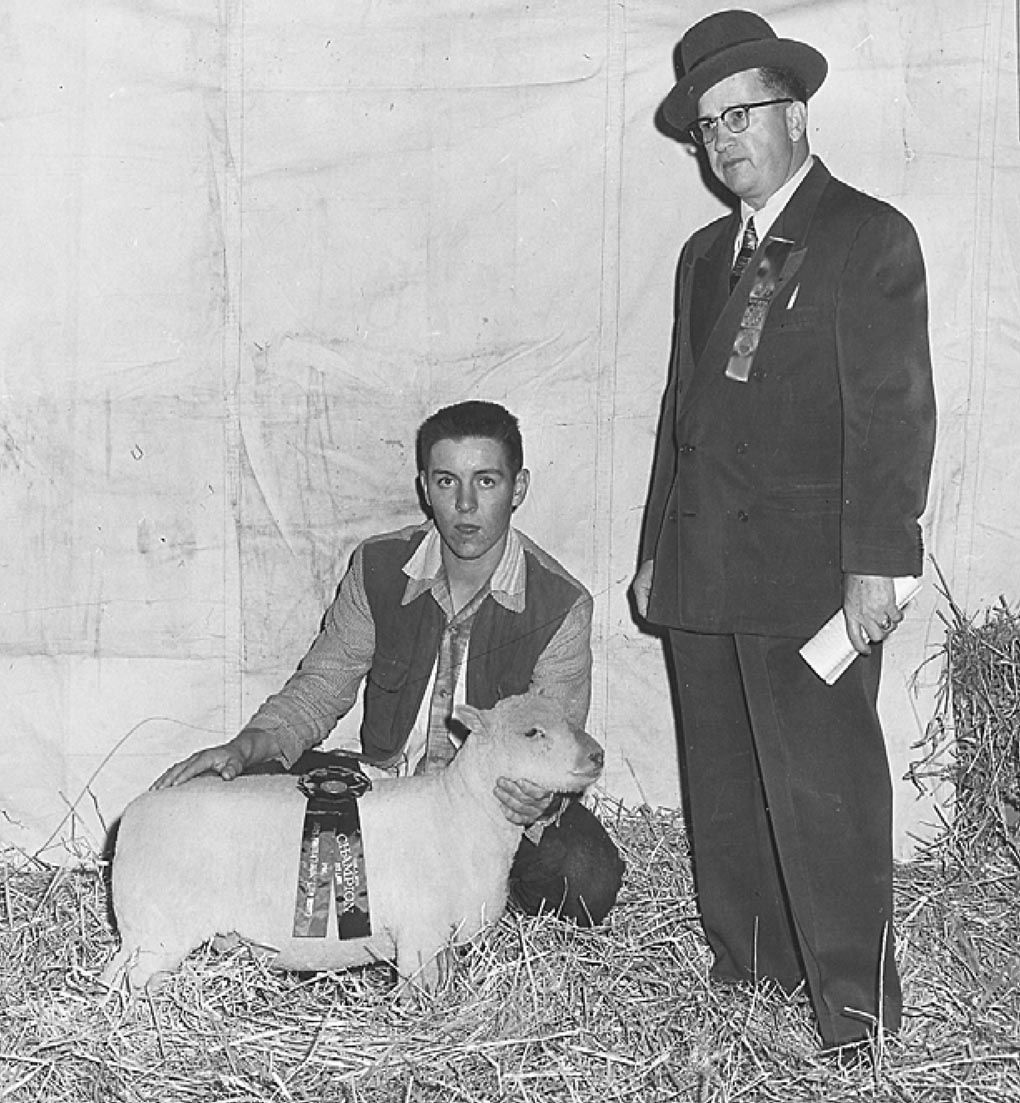 Chase Ratliff, age 10, holds the halter for his Supreme Champion heifer Treasure at the Kansas Junior Livestock Show in Wichita in 2008. His sister Morgan holds the purple ribbon.

David Ratliff, age 13, holds the halter for his Supreme Champion Maine-Anjou crossbred steer at the Kansas Junior Livestock Show in Wichita in 1979.

The dark Limousin heifer stood still as the blue-jean clad boy pulled the bristling brush through her short hair, grooming her for the upcoming livestock show. “Her name is Treasure,” said 10-year-old Chase Ratliff, talking about his Supreme Champion Heifer. Chase is the latest of the family to earn a championship title from the Kansas Junior Livestock Show - and he is the third generation in a row to have the honor. His father David preceded him in 1979 and his grandfather Gail before that in 1955. “We’re very glad for him,” said his Dad, the middle generation Ratliff. Expressing appreciation for his other children, David Ratliff described how much time his daughters put into showing the livestock. “Michelle and I have four other kids who show and work just as hard as Chase. He just happened to have the heifer that turned out well.” Winning the champion title this September, the Ratliff family regularly shows at the Wichita event and local livestock promotions. “This heifer has won supreme champion three times at other shows,” said David Ratliff. “She competed with 313 heifers from 90 counties in the Wichita event. Treasure has never lost in her class.” Also very proud, is 70-year-old grandfather Gail Ratliff. “Chase won with a heifer,” said Gail Ratliff. “David showed a steer and I had a lamb.” In the ‘50s Gail Ratliff’s father bought him a lamb for 4-H. He learned to halter and groom with it and took it to the Kansas Junior Livestock Show. “The lamb was my 4-H project. It was one of the first times people sheared the lambs before they showed them. I took it to the show in Wichita and was fortunate enough to win,” said Ratliff. Working with his son to manage Cherry Creek Farms in Westphalia, Kansas, the elder Ratliff is quite busy seeing to all of the chores while the younger family shows cattle. “We manage 600-700 head of cattle as a cow-calf operation. About 200 head of those are purebred Limousin,” said Ratliff. “My job is to stay here and do the chores while David is away. I’m retired from the livestock showing.” Gail had a big family together with his wife Luella, now passed on. “I had three daughters besides my son David, said Gail Ratliff. ‘Now I have 14 grandkids and one great grandson.” The Ratliffs began to show Limousin cattle just because of a bull that David bought. “I liked the muscling on a Limousin bull I bought in the late ‘70s, said David Ratliff. “We brought him home to breed to commercial cattle and it just went from there.” Cherry Creek Farms has quite a cattle working chute and pen facility in one of the barns by Gail Ratliff’s house. “We have a hydraulic operated chute and pen system,” said the elder Ratliff. “I’m old enough now that it is difficult for me to get in with the cattle. With the hydraulic gate and pen, we minimize how much we have to herd them on foot.” As part of a complete livestock program, Cherry Creek pastures, raises hay and also has a large no-till row-crop operation. “We do our grazing, hay baling and row-cropping on 2000 acres and rent another 1500,” said Ratliff. We raise our own feed.” With a farm this size, the Ratliff family no longer does the entire operation by themselves. “Because our cattle end is so time consuming, we have share farming agreements with local growers on most of our field crop acres,” said Gail Ratliff. “And the no-till is the way to go. If I can’t stick my plier handle into the ground - then it is too compacted.” In addition to Chase, David and Michelle are the parents of Morgan, age 17, Cheyanne, age 13, Chase’s twin sister Madison, age 10 and Mayce, age nine. The kids are busy in athletics and school activities in addition to the livestock showing. They regularly show at local county events. Also they show at the National Western Livestock Show in Denver and the American Royal in Kansas City. “There’s a lot to showing cattle,” said David Ratliff. “We work year-round to break them to halter. We’re usually training around 15 at a time.” Even though it is work, the Ratliffs enjoy their tasks and farm life. “We do something with the cattle every day,” said Ratliff. “It’s still a lot of fun, for me and the entire family.”