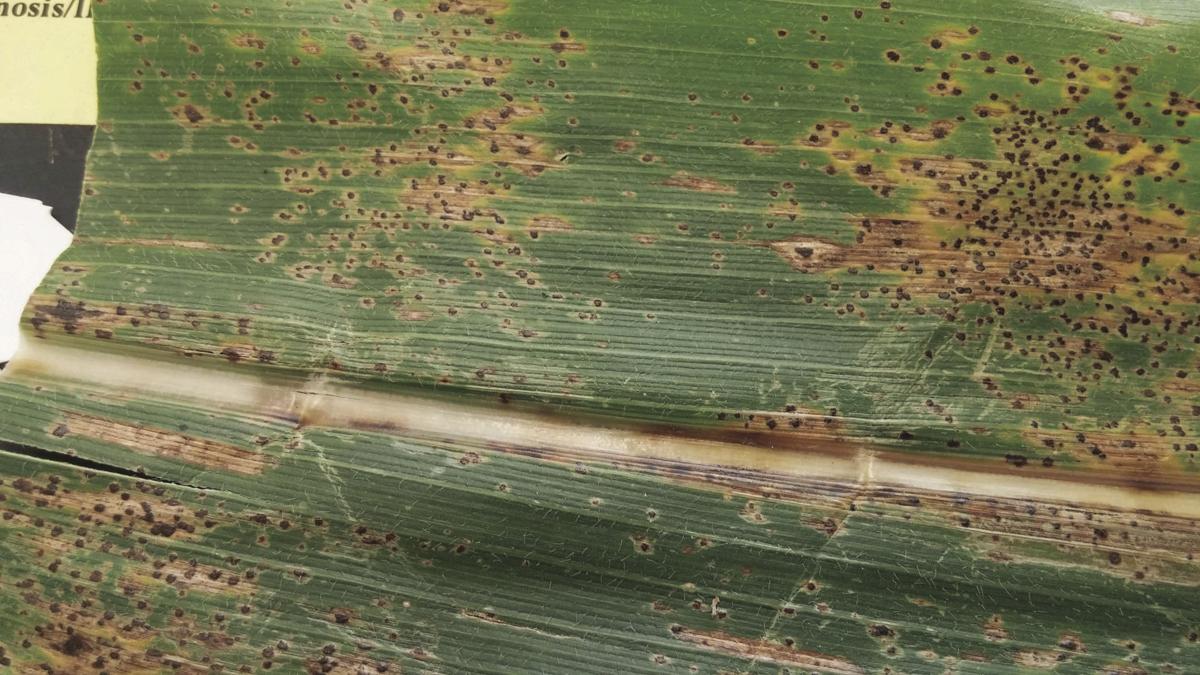 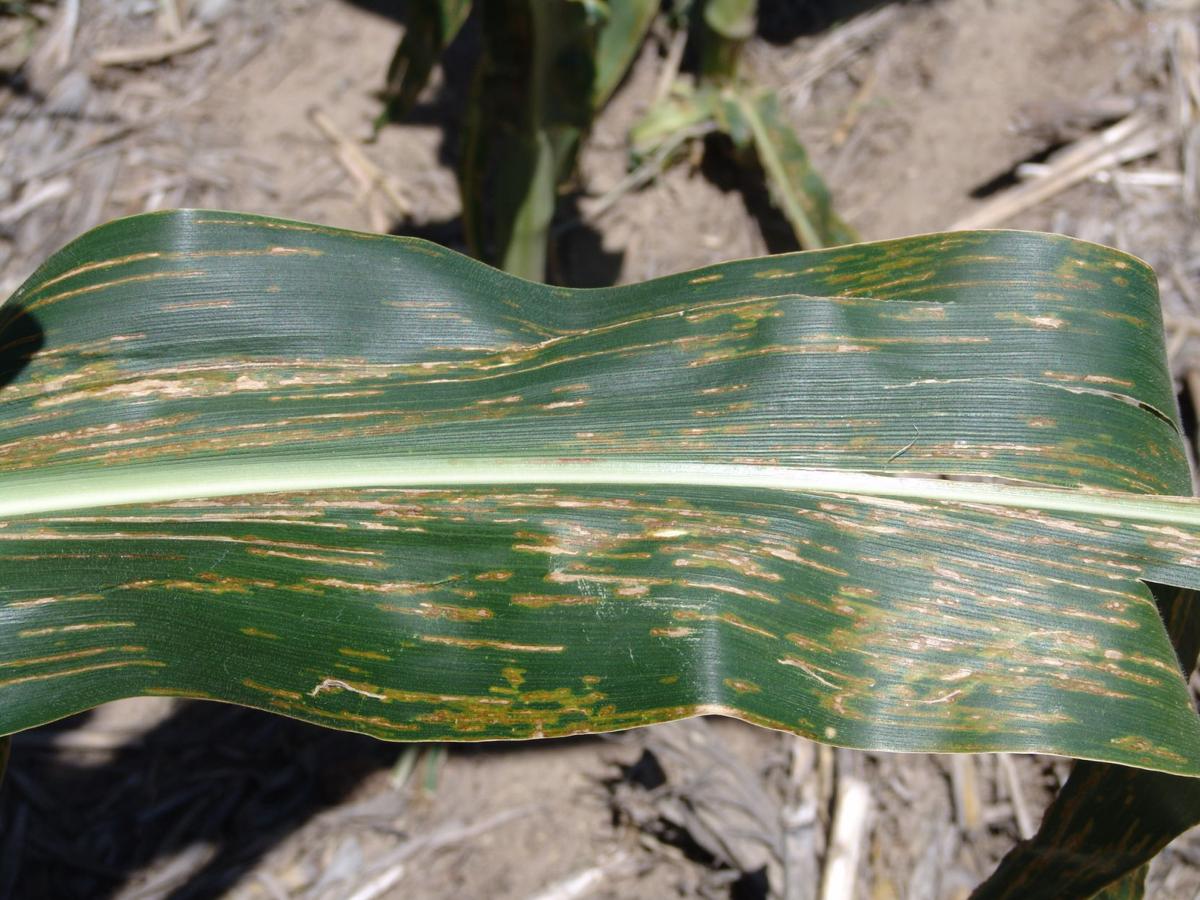 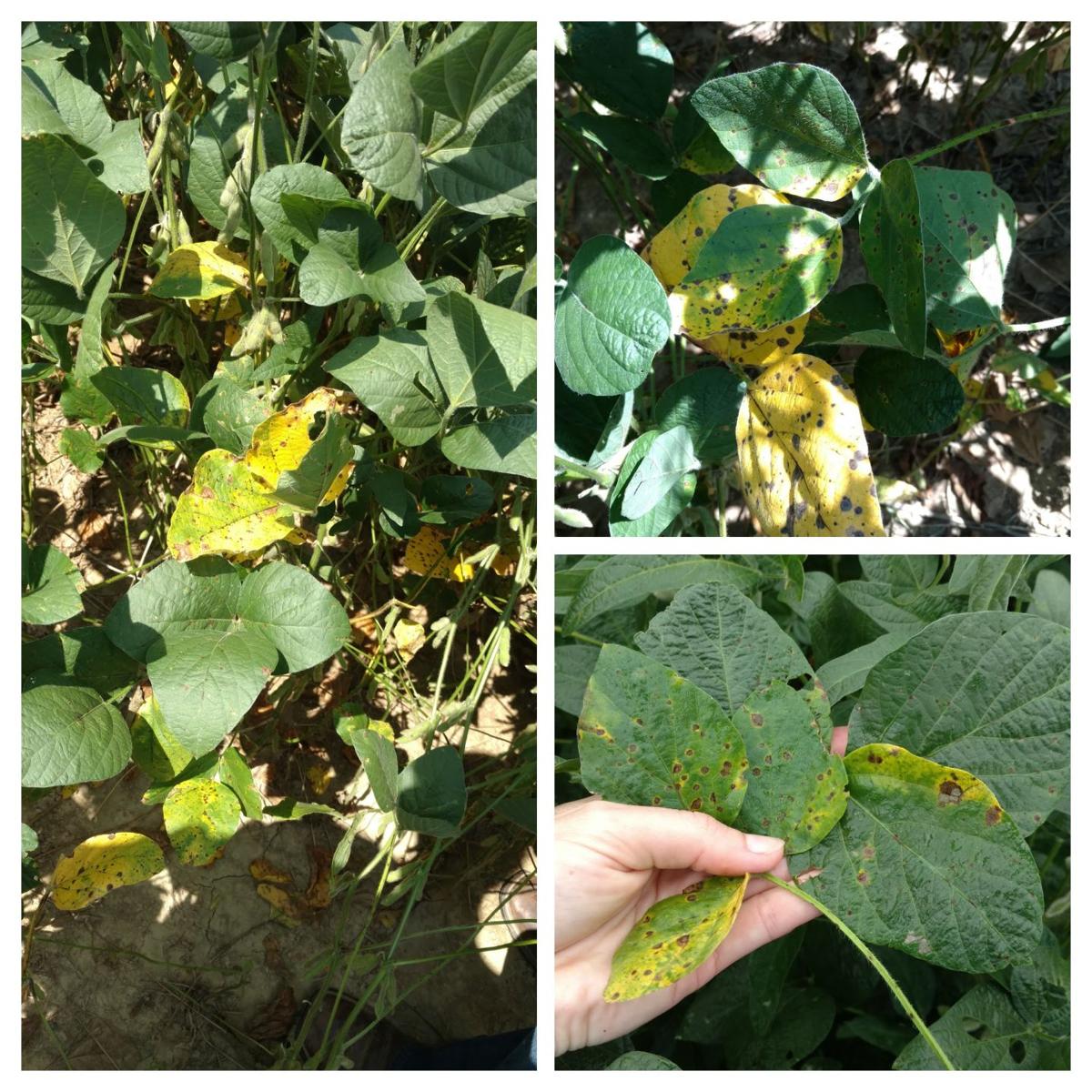 Target spot lesions can display concentric rings and sometimes have yellow halo, found in the lower canopy. It could be mistaken for frogeye leaf spot on some varieties. Photo credit: The University of Tennessee's Institute of Agriculture 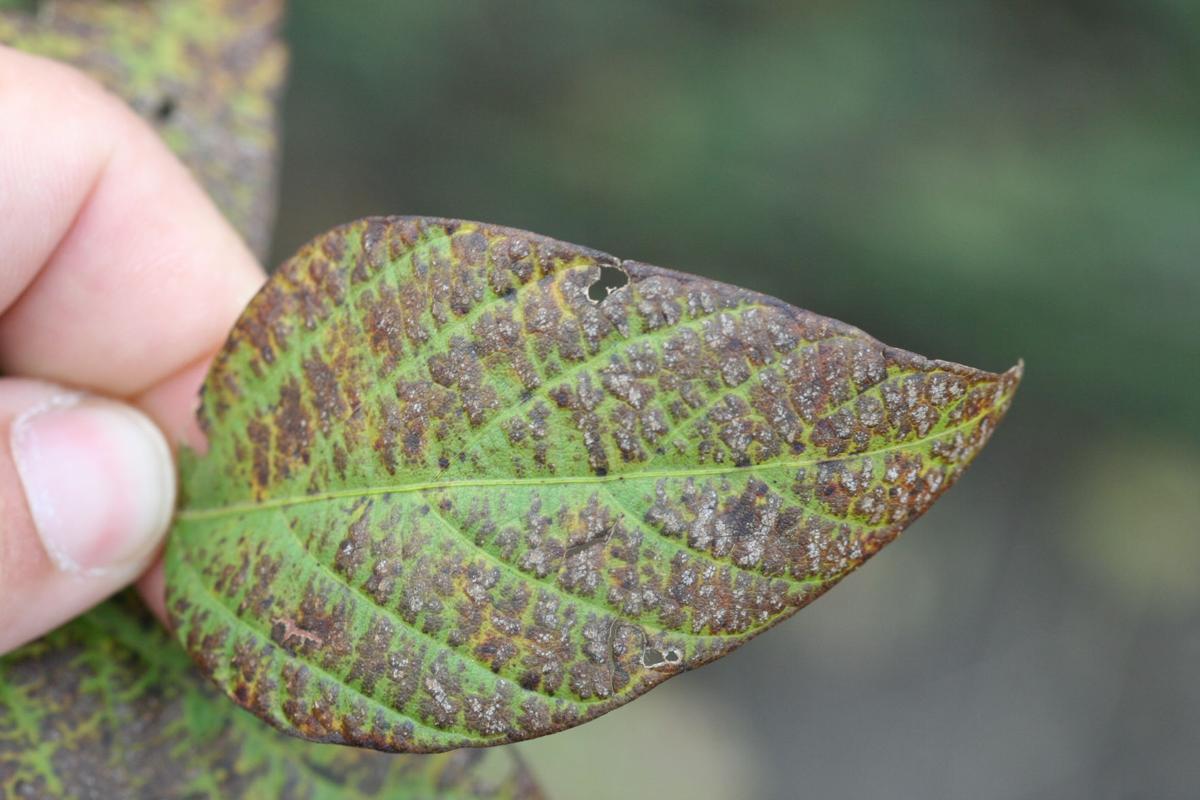 Disease threats don’t just originate from a potential influenza or coronavirus outbreak — Missouri crop producers should be on watch for potentially devastating diseases in their corn and soybean fields.

Kaitlyn Bissonnette, University of Missouri Extension plant pathologist, warned producers about the pathogens on her radar at the Barton County Soils and Crops Conference in Lamar earlier this month.

“I’ve got some bad news, guys,” Bissonnette said. “Corn is a four-letter word.

“We have detected bacterial leaf streak in the state.

“The other bad news is it’s on this side of the state and it likely could be in this area quite easily,” she continued.

“If you see anything that you suspect is bacterial leaf streak, please send it to me,” she requested.

The wind-blown bacterial pathogen typically follows inclement weather like the storms brought on from hurricanes. “It will favor the wounds that have been created by high winds,” Bissonnette said.

“Irrigation increases the risk of disease overall and it increases the severity,” she said, “so that is something to keep in mind because bacteria like a lot of moisture.”

The pathogen’s impact on yield is related to the amount of leaf area affected, she continued. “If about 50 percent of the leaf area is affected, then you start to see yield loss.

“Generally, disease levels aren’t high enough to have a huge impact on yield,” she added.

To manage the disease, Bissonnette suggested looking at different corn hybrids. Popcorn and sweet corn tend to be more susceptible but hybrid corn varieties can get high levels of disease.

She also recommended weed management to reduce risk of an outbreak.

“The state grass of Missouri, tall fescue, is a weedy host that does not produce symptoms,” she said. “We have an asymptomatic host throughout the state… Potentially, we have a source of overwintering as we move forward, especially now that it’s been detected in the state, so we’ll see how that impacts disease levels.

“In general, I’m not as worried about bacterial leaf streak as I am worried about the next disease,” she said. “This is just something to monitor for, especially in irrigated conditions. Be vigilant about what you’re looking at.”

Tar spot, on the other hand, is a concern for the pathologist.

“This disease is far, far away from here right now but it might be headed your way,” Bissonnette said, adding the disease was first detected in the U.S. in 2015 but did not start causing yield losses until 2018.

“Yield loses of up to 60 percent were reported,” she said, “and they had been sustained at 60 percent.”

The disease was found in northeast Missouri in three counties in 2019 but yields were not impacted. Though researchers do not know much about this pathogen, they do know it is caused by Phyllachora maydis and results in raised black dots on the surface of corn leaves, husks and virtually every part of the corn plant.

“A lot of times you’ll see it in mid- to late August as the plants start to senesce,” Bissonnette explained, “and it sometimes is surrounded by a tan or brown halo.” The spots can be found in green or senescing tissues and may be mistaken for southern or common rust, she added. However, tar spot will leave the leaf surface intact. It also overwinters on residues so fields with a history of tar spot will still have it the next year.

“It has been detected in a total of nine U.S. states, including Missouri,” Bissonnette said. “Significant losses have been reported in four states: Indiana, Illinois, Wisconsin and Michigan in 2018 and 2019.” In Iowa alone, the pathogen was found in approximately 70 additional counties last year.

Bissonnette said the ideal conditions for the pathogen to develop are monthly average temperatures between 63 and 72 degrees, average relative humidity greater than 72 percent, an average of seven hours per night of leaf wetness, 10 to 20 foggy days per month, and monthly rainfall totals of at least 5.9 inches. Irrigation also factors into the pathogen’s potential development.

“There’s a likelihood that tar spot will come to this area or be established,” Bissonnette said.

“By the time anything gets here, we should have more information,” she added. Researchers in the impacted states up north have noticed differences among corn hybrids and are testing difference fungicide combinations and timings to combat the disease.

“This has potentially very large impacts for U.S. corn production,” she warned.

“This is a potentially devastating problem even though it’s not quite here yet,” she emphasized. “Scouting is going to be the first and most important step.”

“There was actually one field in this region that had target spot show up really prevalently and had some significant losses in a particular field,” she said.

Because it was a rain-filled year, the field was planted on 15-inch rows and target spot likes high humidity, conditions were perfect for the disease’s development.

“Target spot leads to defoliation of those lower leaves,” the pathologist explained. “A lot of times you’ll start seeing it in that lower canopy, and it’ll stay down in the lower canopy.”

Generally, the disease shows up late in the season around the R5 or R6 stages and doesn’t cause much yield loss. However, the local field Bissonnette referenced had an earlier onset which resulted in damage to the pods.

When scouting, she said producers should look for spots with concentric rings and recommended sending samples to a lab for proper identification as it can be mistaken for other pathogens.

“Management of target spot has to occur before the season even begins,” she said. “It really starts with crop rotation.” The disease does not target corn or wheat but survives on residues and in the soil. She also recommended increasing airflow in the canopy, increasing row spacing and selecting resistant varieties if target spot becomes an issue.

Bissonnette also warned producers she’s seeing a lot of Cercospora leaf blight across the state, which results in a bronzing in the upper canopy. The disease likes warm, humid conditions and is thought to occur late in the reproductive stages. However, Bissonnette has observed it earlier in the season for the past two years.

“This play a role in the disease cycle because that means infection is occurring a lot earlier and potentially it could lead to higher levels of infection later,” she said, adding this can lead to premature defoliation and impact grain fill.

She also said fungicides aren’t very effective on the disease because the pathogen traditionally shows up later in the season and because the bronzing is a result of a toxin, not the pathogen itself.

Bissonnette warned producers about increasing fungicide resistance and urged them to use them properly to prevent further resistance.

Since the outbreak of Asian soybean rust in 2005, fungicide use sharply increased and has continued to rise since that time.

She discouraged producers from applying the same mode of action repeatedly and also from applying a fungicide after the disease is already present at high levels. Additionally, proper identification is important to ensure a fungicide is being applied for the right reasons and not applied to treat a bacterial disease.

Frogeye leaf spot is an example of a pathogen with increasing fungicide resistance in Missouri, Bissonnette said, adding preliminary data shows resistance may be widespread across the state. She recommended producers keep history of their fields.