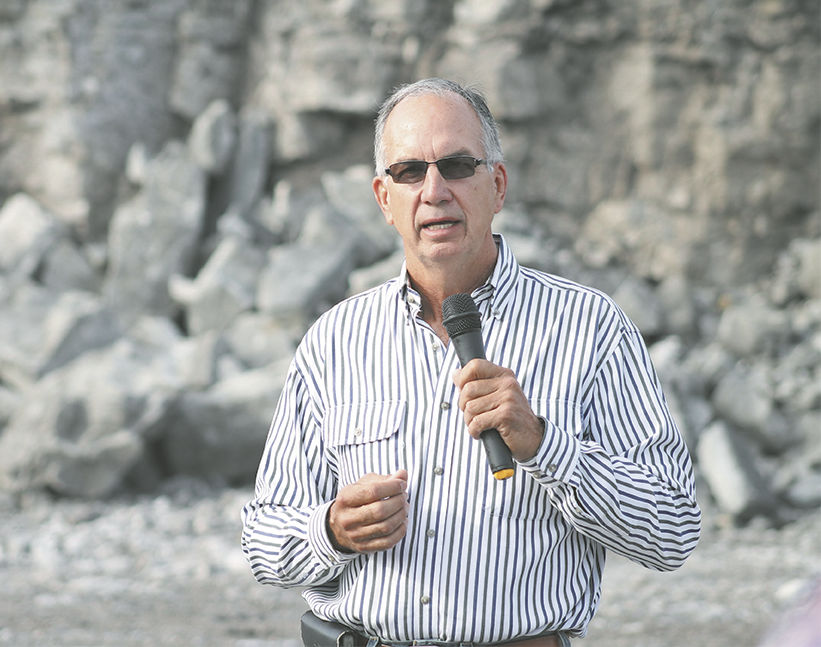 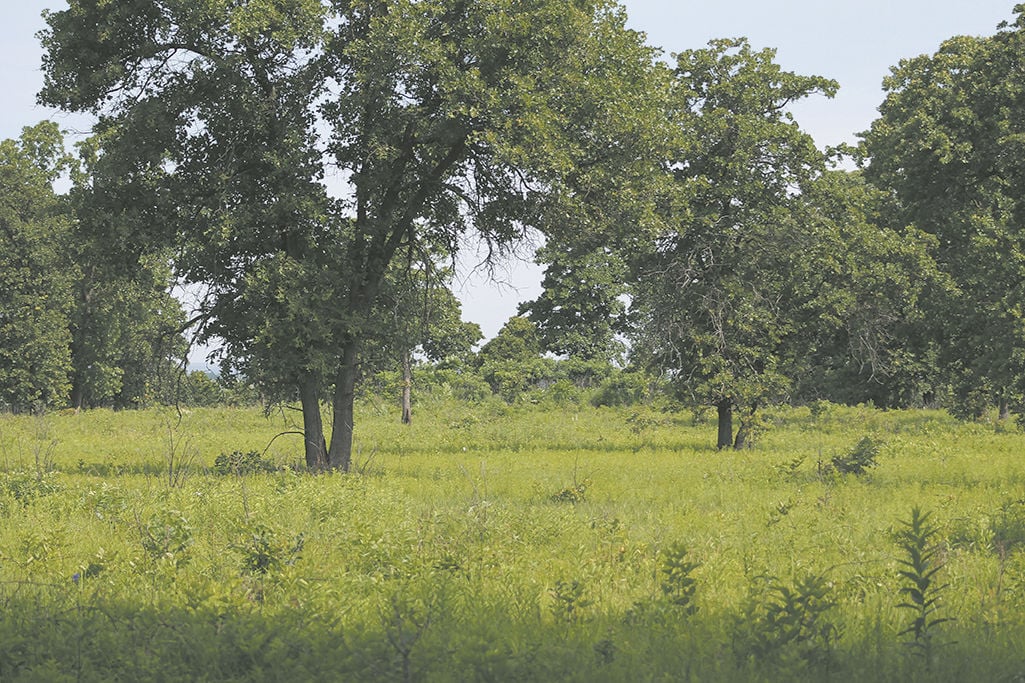 The Stotts Ranch is taking a step back in time, transforming the land into what it was like 150 years ago. 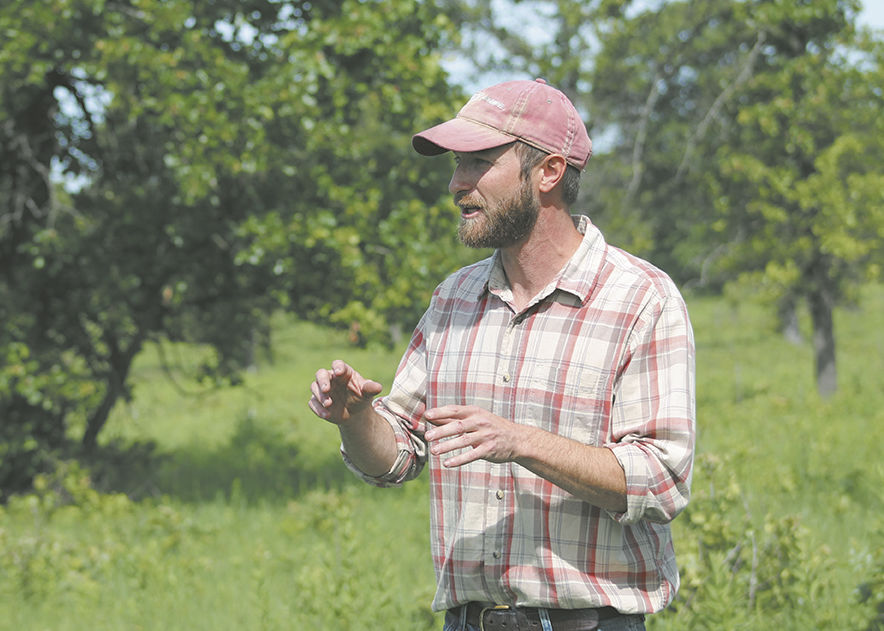 The Stotts Ranch is taking a step back in time, transforming the land into what it was like 150 years ago.

A rancher’s care for the land lies at the corner of gratitude and good sense —and that’s where you’ll find the Elk County Livestock Conservation Tour.

The biennial event focuses on wildlife, natural resources and stewardship of Elk County land. This year’s June 8 tour marked the 79th conservation tour and a long history of a county caring for its land and its people.

The first stop on this year’s tour focused on one of Elk County’s lesser known natural resources: limestone. Black Quarry lies east of Howard, Kansas, and is owned and operated by Harshman Construction, a company nationally recognized for its reclamation efforts.

“The limestone in this county is excellent in quality,” said Warren Harshman, owner of Harshman Construction. “The two things needed to be successful in this business are quality stone and a solid market, and we have both of those things in this area.”

Harshman continued by revealing some of the strict processes the rock, used mostly for concrete and asphalt, has to endure before it can be sold. Crushed limestone goes through numerous processes like tumbling to evaluate its wear, freeze and thaw cycles, and density tests to determine how it will hold up over time.

Before the quarry could start digging or crushing rock at all, the “overburden” — or the top, cream-colored mixture of rock and limestone — had to be removed, Harshman said. At the Black Quarry the rock lies in a ratio of 6 feet of overburden to 22 feet of quality limestone, an ideal proportion for ease of production.

“We will bring the overburden around and use it to fill in the quarry as we progress,” Harshman said. “We’re constantly in a state of reclamation while we’re stripping the limestone.”

The primary rock crusher used onsite can crush over 1,000 tons of rock an hour, approximately 40 semi-loads. Limestone pieces are screened and separated by size.

After crushing and screening, the rocks are washed and prepared for transport. To contribute to their conservation efforts, the wash water is saved to reuse on later loads of rock.

“We take a lot of pride in our reclamation efforts,” Harshman said. “Our latest finished quarry, aside from a source of water, could not be identified as a former quarry from the road, and that’s our goal.”

The second stop on the tour after a long haul across Elk County was Stotts Ranch, a location that can only be described as vast. Stotts Ranch is a family trust-owned landmass that encompasses over 6,000 acres unbroken by county road.

Third generation land-owner Caleb Stotts described the ranch’s savannah restoration project, an attempt to rebuild one of Kansas’ most delicate ecosystems in the Cross Timbers.

Stotts explained the Cross Timbers is a strip of grasslands dotted by primarily oak forests. The oak trees being either completely removed from the land or allowed to grow into dense forests with underlying brush has caused the savannah-like ecosystem of the Cross Timbers to dwindle over the last 150 years.

“I was fascinated by the way these trees and the prairie grass had come together,” Stotts said. “So with a savannah restoration we were trying to decide what the land had been like before and return it to that state.”

The family used government land surveys from the 1860s to determine the land’s previous condition was primarily prairie with a few scattered oak trees.

“We know the sandy soil type in this region gives a slight advantage to the oak trees over the tall prairie grasses,” Stotts said. “Nowadays you drive around Chautauqua, Elk or Woodson counties and you see these oak forests that weren’t there 150 years ago.”

Stotts determined that most of the trees on the ranch were between 30 and 40 years old, which is considered new growth for a tree. The age and condition of the trees allowed Stotts to cut down a majority of the brush with a clear conscience. The trees selected to be cut were based on their “happiness,” meaning trees with a large trunk, tall and wide crown, and a good distance from other trees.

The result is a savannah-like prairie with increased biodiversity and wildlife populations like bobwhite quail and the lesser prairie chicken. The land went from 80 percent tree canopy cover to 6 percent canopy cover and can now be maintained with regularly scheduled burning.

A recently fenced pond and livestock watering system at the Cannon ranch, owned by John and Shari Cannon, was the focus of the third tour stop.

Fencing a pond and installing a stock tank that allows cattle to access to the water without access to the pond itself can improve the water quality and the structure of the pond.

“They had a pond here that was in need of repair, some cleaning out and a little rehabbing,” said David Criger, Natural Resources Conservation Services technician. “In order to maintain it, the idea was to put a fence around it.”

Even with increased rainfall and a lack of vegetation on the banks, Criger pointed out the pond structure is standing tall. The water quality and clarity was also elevated due to the lack of damage by cattle.

The project was an existing pond where they dug down deep enough to install a supply line with enough elevation to feed the tank.

“The justification for doing this is to relieve some of the travel and pressure that’s put on shorelines of ponds and streams in the area,” Criger said. “For us at NRCS, we see this as a very viable practice.”

The Cannons also recently build a new set of working pens on the same property so the tour participants were invited to take a look around and take home ideas for their own future projects.

The final leg of the trip was actually just a stop on the side of the road to talk about invasive old world bluestem grasses and the threats they pose for native prairie.

Both Caucasian bluestem and yellow bluestem are considered to be old world bluestem varieties. Although the plants have the ability to bounce back after close grazing, they are less palatable to cattle and alter the carbon-nitrogen ratio, killing surrounding plants.

“In our quest for species that offer bigger and better grazing we brought the old world bluestems over from Asia,” said Dane Varney, NRCS range specialist. “In a monoculture this plant grows very well and accepts fertilizer well. The problem is when it commits chemical warfare on all the plants around it.”

Where an entire pasture has been overtaken by old world bluestem varieties, Varney suggested fencing and heavy grazing to contain, rather than eradicate, the problem. However, in native pasture situations, it’s best to attempt to save the prairie grasses.

“In a native grass stand, we ideally don’t want to eradicate old world blue-stems using glyphosate because it also destroys the native prairie,” Varney said. “Using a product with imazapyr in it has shown us our best results.”

A quarter- to a half-pound of imazapyr per acre often effectively kills old world bluestem varieties while suppressing native grasses.

“I compare it to chem-otherapy in a human,” Varney says. “The surrounding plants will look damaged and depressed for a while but by the beginning of the next growing season it has regained vigor.”

Varney stressed the importance of selecting blue-stems in the native plant communities to protect the natural grazing lands of the plains and to provide the best forage for cattle. £