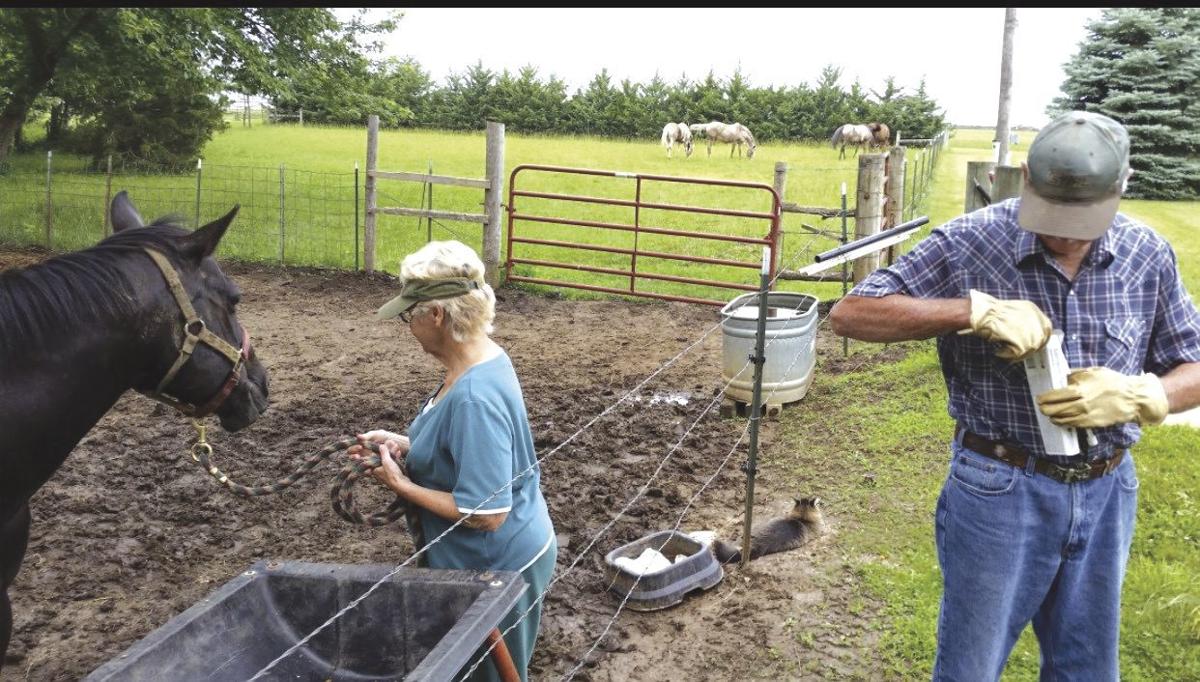 Married more than 58 years, Mike and Sharon McGlynn fell in love while attending deaf school. Horses are an important part of their lives appreciating the companionship and natural understanding time with equine friends. 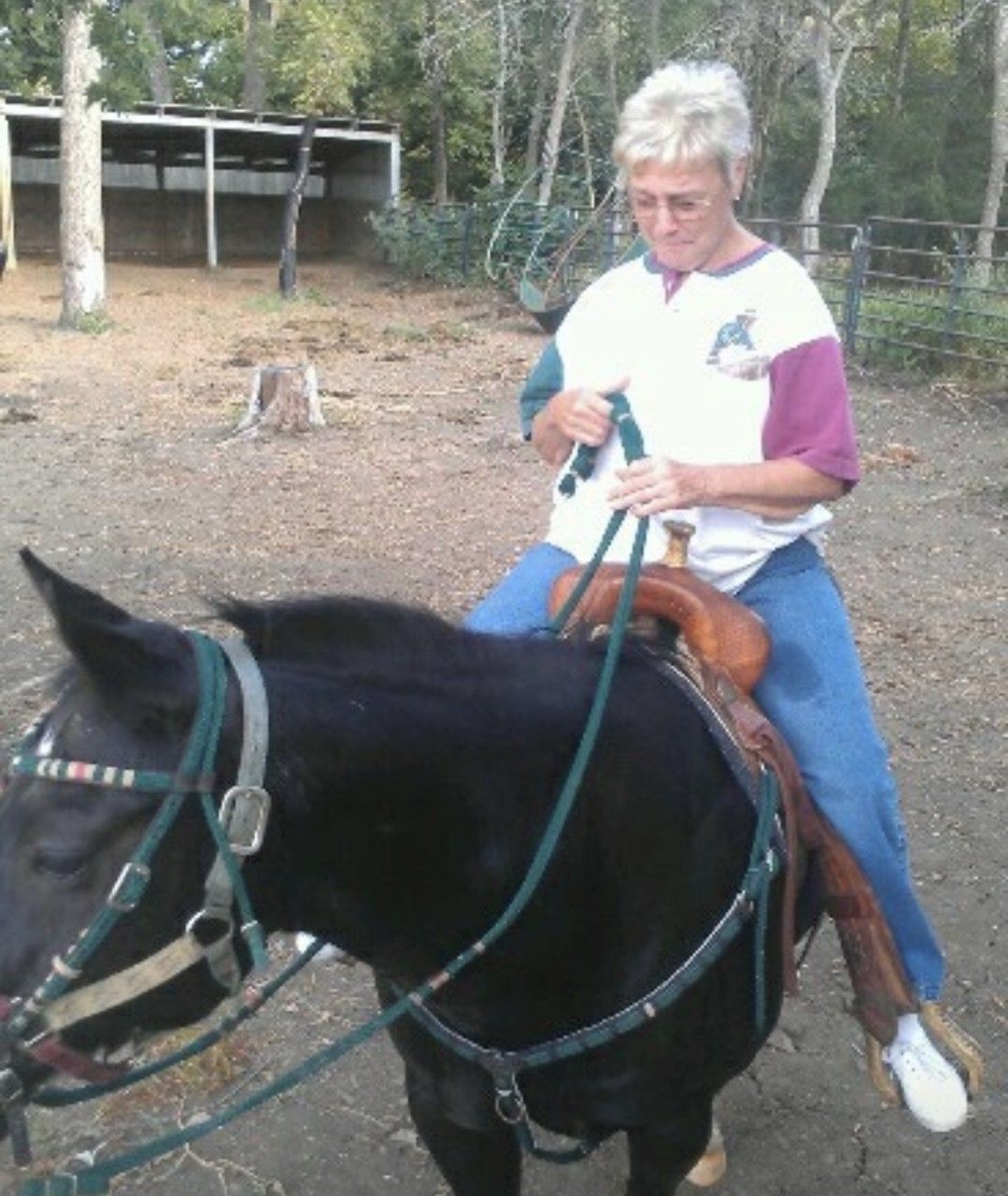 Tears flowed uncontrollably in happiness when Sharon McGlynn of Paola, Kansas, was again horse back on Moonshine after recovering from a serious car accident with her greatest fear being unable to ride again. 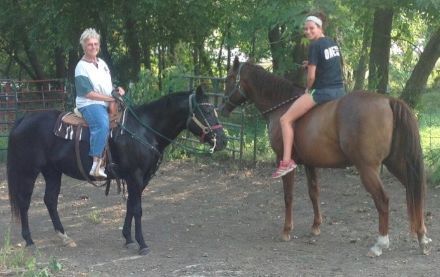 Married more than 58 years, Mike and Sharon McGlynn fell in love while attending deaf school. Horses are an important part of their lives appreciating the companionship and natural understanding time with equine friends.

Certainly, horses add to life’s pleasures for those lacking or deficient in the sense of hearing.

The fact became most obvious at a recent horse seminar in Garnett, Kansas, where a deaf couple and friends were all smiles “listening” to the program.

Gayla Staats, daughter of Mike and Sharon McGlynn of Paola, served as sign language interpreter for the obvious horse lovers.

“My parents have had horse for more than 25 years. Mom is 80 years old and still loves riding horses,” Staats said.

Deaf people are perhaps more knowledgeable about horses than many horseback riders and enthusiasts.

When they can’t hear, a deaf person is more vision sensitive to the horse. “They become alert to changes in body tension and how a horse reacts to variations in environment,” Staats said.

Sharon McGlynn has been deaf since she was 2 years old after being stricken with chicken pox causing high fever. “It started in the whites of her eyes and ended up causing a loss of hearing,” Staats explained.

Raised on a farm, Sharon always had a strong affection for livestock especially horses liking to ride at an early age. “Mom went to the deaf school at Olathe where she met my dad. They started dating when she was 12 and he was 13,” Staats said.

“After high school graduation, Mom had an opportunity to attend college for the deaf, but decided she’d rather marry my dad. They’ve been married more than 58 years.”

Both of the McGlynn couple’s daughters have normal hearing and speech. “We communicated by sign language. It was what seemed a normal childhood for us growing up with deaf parents,” Staats said.

“People don’t realize it, but children learn to communicate by sign language before they can speak,” she said. “Our grandparents had normal hearing so we learned to talk with them and other family members.”

Today, both Staats and her sister continue as sign language interpreters serving deaf people in a variety of ways.

While deafness can be genetic, that is not always the case. “Five of 13 children in my dad’s family were deaf, but my sister and I have normal hearing and so do my daughters and others in our family,” Staats said.

Being deaf seems only to enhance interests, knowledge and abilities with horses. The McGlynns and their friends’ enjoyment and understanding the horse program at Garnett was obvious as Staats interpreted the speakers in sign language.

“Mom found out about the program and really wanted to go. She asked me to take them and their friends to sign language interpret the meeting,” Staats said. “They wanted to learn more about caring for older horses because Mom’s horse Moonshine is 30 years old.

“They all really enjoyed Dr. Fred Gardner as the speaker who has been their horse veterinarian for many years,” she added.

Despite her age and deafness, Sharon McGlynn stills loves to ride and does every chance she gets. “My daughter Carra Mader and I go on horseback trail rides with her and we all have such a good time,”

Although Mike McGlynn doesn’t ride, he and the family friends enjoy owning and caring for horses. “He’s supportive of Mom riding because she enjoys it so much. Mom is fortunate to have such a good horse that she can ride completely on her own,” Staats said. “Mom and Moonshine have an understanding relationship with each other.”

Actually, the McGlynns have had a handful of horses that have worked well for them riding despite their inability to hear.

Gayla and her husband Doug Staats have four horses of their own which get called into use regularly, as well.

When Sharon was seriously injured in a car accident, being incapacitated for several months, her biggest fear was not being able to ride again.

“A year later, Mom finally got back up on her horse and just cried and cried she was so happy to be horseback again,” Staats said.

With a master’s certificate in sign language interpretation, Staats has worked with deaf people in various capacities. “I’m now assisting with video phone calls for a number of the deaf,” she said.

The old saying, “The outside of a horse is good for the inside of a man,” becomes even more true when the person is deaf. There is a seemingly natural communication of love, relaxation and understanding.