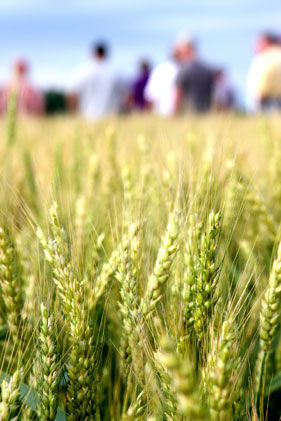 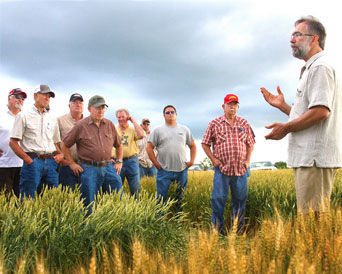 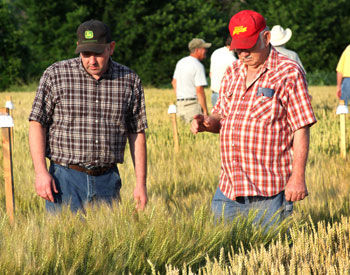 Laying down nitrogen on the wheat fields is quite possibly one of the most complex and critical operations facing producers.

In an effort to provide insight, University of Missouri nutrient management specialist Peter Scharf, spoke on best practices for nitrogen application to nearly 50 producers at this year’s Barton County Wheat Tour near Lamar.

“You really have three good weeks that are the sweet spot for putting nitrogen on wheat,” Scharf said. “The only time I’d want to go outside those three weeks is if I have a really thin stand when it first greens up in the spring then I want to get something on it as quick as I can.”

He kicked off his presentation highlighting key results expected from nitrogen application.

“There are really two things I want from nitrogen,” Scharf explained. “I want it to stimulate tiller development and, secondly, I want a good, dark flag leaf.”

According to Scharf, the initial goal for producers is keeping watch on fields in the early stages to ensure plants are developing a good main stem with three or four tillers (axillary or side shoots) on the plant.

“If the plant is short of nitrogen at that time, it’s inhibited from making those tillers,” he said. “When you see your tiller stand is thin in the early spring, you should get some nitrogen on your fields as quick as you can.”

Research shows that producers will be up to 10 bushels ahead of the game when nitrogen is put down at the moment wheat greens up; however, one must use caution and not jump the gun.

“You’d be 10 bushels even lower yet if you applied it back in January which is well before green-up,” he commented.

Getting a dark green flag leaf means getting enough nitrogen down early enough to have the desired impact.

“I want the nitrogen on really when the plant about to joint,” Scharf said. “A week before or week after is fine but, by the time wheat reaches the second joint, I really want it done. Otherwise, growth falls off steeply after second joint.”

Urea continues to be the dominant choice. However, applying urea too early causes problems. Scharf recommended to those producers wanting to apply urea as early as January that they should protect their investment by implementing coated urea known as ESN, or environmentally smart nitrogen.

Using graphs to illustrate his point, Scharf provided proof that ESN can give producers 5-15 bushels more per acre compared to urea alone.

ESN has a thin, porous polyurethane coating that prevents urea granules from being dissipated prematurely. Basically, the urea just sits there within that little polyurethane ball and slowly leaks out, protecting it from being lost while making it available at the right time for the wheat.

“So if you want to go early like in January or February and put your whole shot on and you have enough tillers, then I strongly recommend ESN because it holds in there until you really need it which is March or April,” Scharf advised.

Should ESN be difficult to acquire, Scharf suggested using a nitrogen stabilizer like Agrotain to regulate nitrogen dissipation. He also noted when using urea, regardless of when it is being applied, producers should put Agrotain on top.

He added, “By having that inhibitor in place, it buys you more time for rain to wash the nitrogen into the soil, and it also takes that soil pH spike way down so you’re not pushing as much into the gas form. We’ve got benefits in January, February and March at about five bushels more at any of those timings.”

Naturally-occurring microorganisms are a part of soil health and subsequently better yields. However, Scharf cautions those allies can easily deplete supplemental nitrogen.

He explained, “If you give them a lot of food that’s short of nitrogen, when you apply your nitrogen fertilizer on it they’re going to eat up residue and that nitrogen.