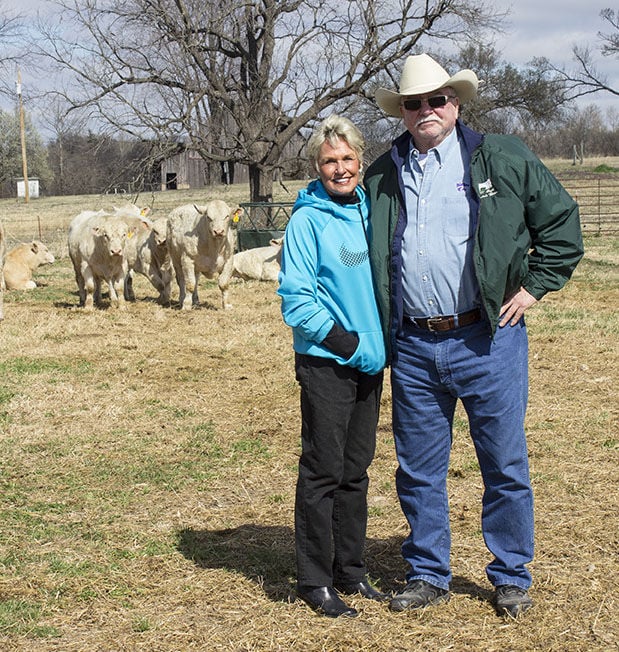 Peggy and Larry Aschermann have spent years developing the genetics of their Charolais cattle at their Carthage, Missouri, ranch. 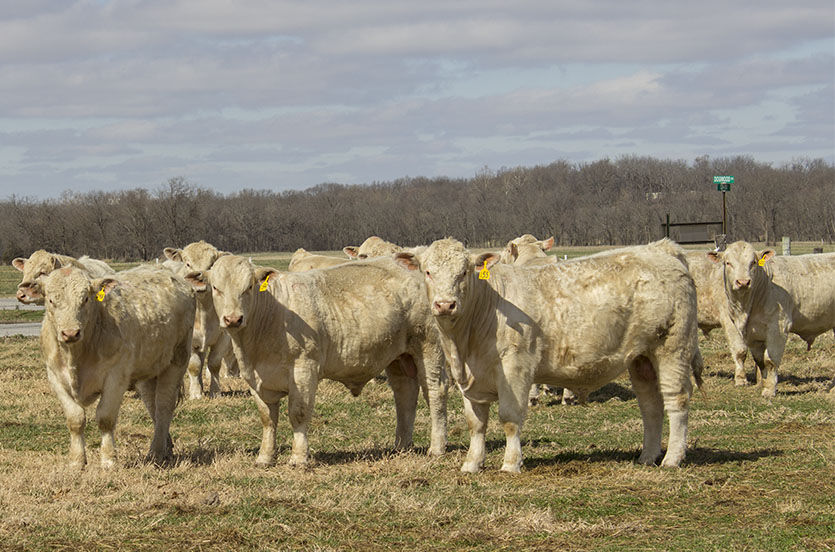 Peggy and Larry Aschermann have spent years developing the genetics of their Charolais cattle at their Carthage, Missouri, ranch.

When it comes to knowing what bull buyers want, the Aschermanns have made it their business to be ahead of the game.

At Aschermann Charolais in Carthage, Missouri, the goal is to help commercial cattlemen raise better feeder calves by raising bulls with a reputation for calving ease, good disposition, sound feet and legs, and fescue tolerance. Both Larry and his wife, Peggy, have worked to build that reputation by using their experiences in the cattle business.

“Her history is really in cattle and wheat so she provides good insight into the cattle operation about things we need to be aware of for our customers,” Larry said, explaining Peggy’s family raised Herefords and wheat for generations in Kansas. “I was born on a grain farm in Illinois and we raised hogs.”

During his 4-H years, his great uncle gave him two heifers on shares — Larry fed them and they split the money when they were sold — and he was hooked. At the age of 13, he began to borrow money and buy cattle.

“There’s nothing I like better than watching a cow have a baby calf,” he said with a smile.

After attending Kansas State University and showing cattle for people to put himself through school, Larry worked as a fieldman for the American Shorthorn Association and was the first executive secretary for the American Maine-Anjou Association. He went back to Illinois and farmed for a period but quickly learned grain farming was not where his heart was. He took a position at a Monsanto subsidiary called Farmers Hybrids and worked on a program, which was developing eight proprietary composite lines of cattle for a rotational crossbreeding system.

But during that time, “I became infatuated with southwest Missouri,” Larry said, adding they bought an existing livestock facility and moved to the area.

Under their direction, the Four State Stockyards in Diamond grew to be one of the top livestock markets in the state. It also provided Larry with the unique perspective of seeing what worked for commercial cattlemen — and what didn’t.

“In 1980, the area had a mixed bag of genetically diverse cows,” Larry said. “Later, I saw my good producers go to Angus bulls to clean up their cowherds or make them more functional.”

When it came time to sell the stockyards and reenter the purebred business, he narrowed his breed choices down to Charolais. He chose the breed because Charolais-Angus cross cattle were — and still are — desired by feedlots and packers, he explained.

“I saw a chance to moderate Charolais to where they were functional in the commercial cattle business in this part of the world and, at the same time, provide more growth and hybrid vigor,” he explained, adding his confidence in crossbreeding and hybrid vigor really cemented his decision to go with Charolais cattle.

“I took the breed and started modernizing them — for lack of a better term — through moderation,” he continued. “In the process, the show ring started picking the kind of cattle we were raising so we had great success in the show ring.”

During the 15 years they had the stockyards, they saw the difference genetics makes in the prices received for calves due to disposition, growth or hair color.

“Larry spends a lot of time on genetics,” Peggy said with obvious pride in her husband. “I may not have a lot of experience with geneticists but it’s amazing to me how he can figure out today what the cattle market is going to want and need in the future.   And, truthfully, sometimes he’s a little ahead of everybody else. He really is. It takes them a few years to catch up with him. But I’ve never known him to be wrong, and it’s amazing how good he is at genetics.”

Larry added tweaking the breeding and genetics of their cattle has been a long-term project. Breeding decisions today have to be what customers need years in the future when the animals are actually sold.

They have two to three generations of calving ease built into their cowherd. At the same time, they take pelvic measurements into consideration as well as calving ease. This keeps cow size in check and keeps calving ease consistent in the herd, Larry explained.

“We’ve worked on calving ease from the sire side but we’ve also done it from the cow side,” he added, emphasizing they have worked diligently to develop cattle that will perform consistently for their customers.

EPDs — such as calving ease and birth weight — are only one of the tools they use to make breeding decisions.

“A lot of the things we select for — there are no EPDs,” Larry said, emphasizing their focus on foot and leg soundness, fescue tolerance and eye appeal. “When you’re producing feeder calves that go into the sale ring and the order buyer has a minute to decide breed composition, body condition, whether they look like they’re going to feed good or not, they have to make snap decisions. So, you provide them with cattle that look the part, act the part, have the color, and have the growth.”

Peggy added, “Disposition is big. If I’m out there by myself, I don’t want to get run over by a bull.”

At Aschermann Charolais, they do not spend much time trying to improve their fescue pastures but instead focus on animals that can handle the often-unimproved fescue pastures where they are expected to perform.

“We don’t shy away from fescue hay or pasture,” Larry said. “We almost insist that we grow our bulls on fescue so they are ready to go.”

In addition to developing reputable lines of Charolais bulls, they have also branched out and experimented with Charolais-hybrid bulls.

“Purebred breeders are, in general, innovators and tinkerers to try and make the product better,” he said. “We added Red Angus-Charolais crosses to our breeding program and, about five or six years ago, we started experimenting with a breed of cattle from Japan.”

The introduction of purebred red Charolais, Red Angus-Charolais crosses  and Akaushi crosses have allowed them to expand their offerings to commercial cattlemen who may want black calves, calves with the potential to grade Prime, or just composite bulls.

“You have to have years of experience, know what your customers want, and provide what they’ll pay for and what will improve their feeder calf production,” he emphasized.

“We try to respond to what our customers want but, right now, we think we have what they need,” the cattleman continued. “We try to be a one-stop shop. If you do not want a purebred Charolais, we’ve got some composites.”

For cattlemen wanting to improve their operations, he recommended looking at their bulls.

“A bull’s half your herd,” he said. “You can have about any cow but you’ve got to have good bulls if you’re serious about making money.”

And the Aschermanns are doing their best to help those producers.

“Our main business is Charolais, but we continue to try to achieve our goals of easy calving, good-footed bulls that thrive in the Four State area on the grasses that we have.

“We’ve bred trait leaders for the breed,” he continued. “We’ve owned and bred cattle that win purple ribbons but our main focus is just on folks that want to raise better feeder calves.”

The Aschermanns are believers in the auction system and sell bulls twice a year in sales at the ranch. Occasionally, they have their herd built up enough for a female sale but that typically doesn’t take place on a regular basis.

With no private treaty sales, the semi-annual sales help them cater to customers who may have bull needs more than once a year. Bulls average 18 months in age at the sales.

The Aschermann Charolais 24th Edition Bull Sale is scheduled for March 18 at the ranch at 3852 County Road 110, Carthage, Missouri. To view the catalog or for more information, visit www.AschermannCharolais.com. £