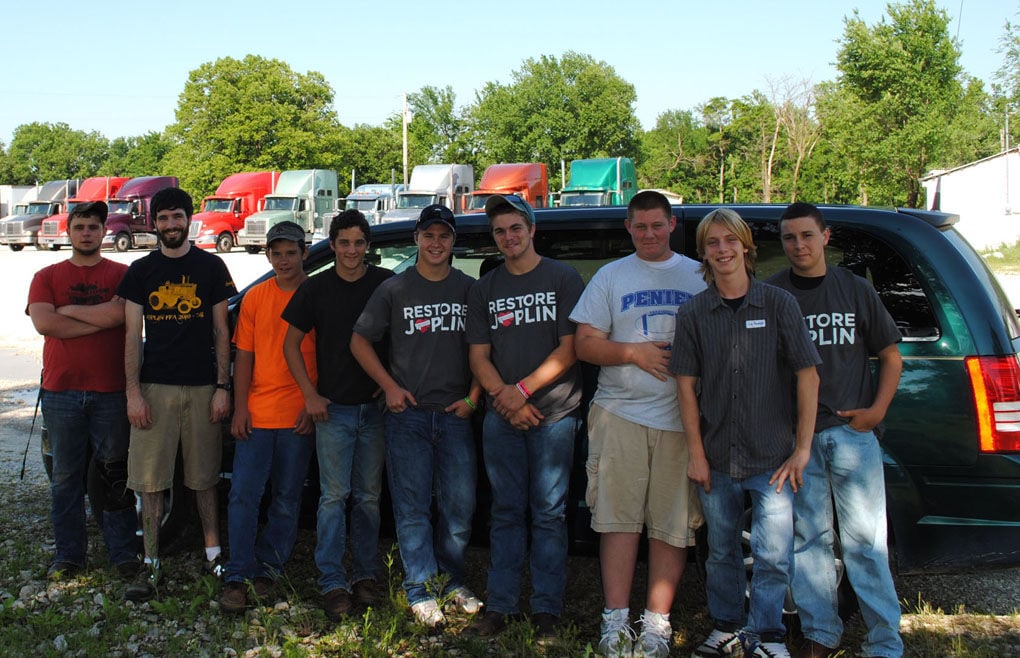 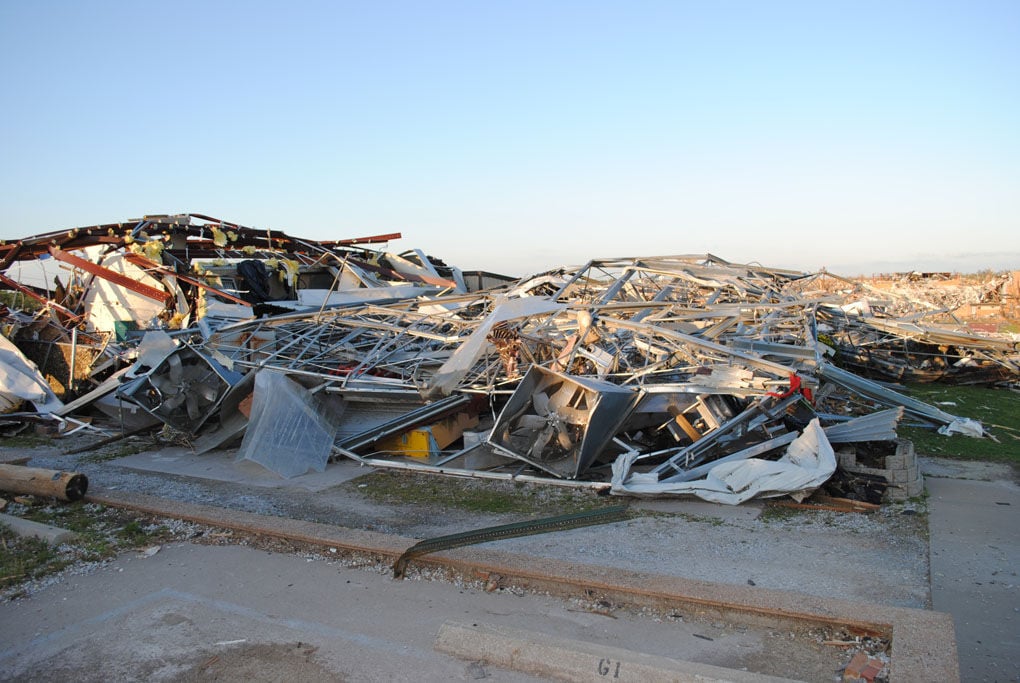 Franklin Technology Center was one of the buildings in the Joplin School District which was destroyed by the tornado, this building housed the Joplin FFA chapter. Pictured is what is left of the greenhouse which served as a source for two major fundraisers for the chapter. This was taken a few days after the tornado hit.

Franklin Technology Center was one of the buildings in the Joplin School District which was destroyed by the tornado, this building housed the Joplin FFA chapter. Pictured is what is left of the greenhouse which served as a source for two major fundraisers for the chapter. This was taken a few days after the tornado hit.

First jobs, for many, are filled with new opportunities, challenges and memories, and for Jason Cutler, Joplin FFA advisor in Joplin, Missouri, his first year of teaching will be a year he will never forget.

Two weeks before the school year was complete, an EF5 multiple-vortex tornado ripped through the town of Joplin, not only destroying homes, businesses, and a hospital but also the Joplin School District.

“This year was already a hard year anyway as it was my first year teaching,” Cutler recalls. “I was looking forward to my second year and having a better understanding of what I wanted to do with the program and having my first year behind me. But next year appears to be another year of obstacles.”

The Joplin High School, Franklin Technology Center and Irving Elementary School were all total losses for the district. The FFA chapter was located in Franklin Technology Center, which was located across the street from the high school. Joplin FFA lost everything including their awards, chapter and student records, newspaper clippings, the copy of their charter and many more sentimental memorabilia for their chapter.

“The Friday before the tornado hit, we were having our annual spring plant sale,” Cutler adds. “I was getting ready to go home and it was after five so I locked the money we made that day in my cabinet and I was going to deposit it Monday morning. On Sunday, I received a phone call that the motion detector had went off in the ag building at that time we heard about a tornado headed toward Joplin and an hour-and-half after the tornado hit I couldn’t get to the school. The streets were covered in debris and when I finally got over to the school everything was destroyed. Natural gas was going off so I wasn’t able to salvage anything.”

The entire school district is within the city limits and a large majority of their students live close to the school.

“I had 16 students suffer damage to their houses and four students lost everything,” Cutler says. “However, thankfully, all 75 of my students are alive.”

Cutler and the other faculty members of these schools were not allowed back on the school property to go through the debris.

“I had a couple students call me and tell me they went into the building and they got my FFA jacket from when I was in high school,” he adds. “So at least I have it, but all my books and notes from college were in my office and they are now gone. Thankfully, a guy in the military was able to get the money out of my cabinet so I was able to deposit it for the chapter next year.”

The school district is planning to stay with their regular schedule and will start school on August 17. The students will be in temporary facilities for up to three years while the school district rebuilds, according to Cutler.

“Next year will be a challenge for our chapter, as my students will be in two locations,” he adds. “Like many of the other clubs in the district—there will not be a central meeting place for the students. In addition, to not having a classroom and being able to be together, our greenhouse and labs were also destroyed.”

The Joplin FFA chapter is different than many of the surrounding school districts as a large majority of their students are within the city limits and have limited agricultural resources.

“A majority of my students do not have access to a farm or have livestock,” Cutler says. “I have several students who grow and enter different horticulture projects in the surrounding fairs. Not only did my kids lose their project for the fairs—but we lost our greenhouse which served as a source for our major fundraisers. We sell poinsettias in the fall and hold a spring plant sale each year.”

Although the Joplin community has suffered a great amount of damage, the surrounding areas and people across the United States continue to come together to help clean-up the city.

“I have been so touched from not only the people in Joplin helping and checking on each other but also everyone else who wants to help,” Cutler says. “I can’t say how thankful and grateful I am enough.”

Three days before the tornado hit another Missouri FFA chapter, Princeton R-V, found out they won the inaugural FFA Chapter Challenge, a pilot competition sponsored by Monsanto received a $1,500 credit line. This credit line can be used on FFA jackets, chapter banquet supplies, chapter medals, awards and to fund trips to FFA functions. After hearing about the devastation in Joplin, Princeton R-V decided to donate their award to help rebuild the Joplin FFA chapter.

“The ag teacher from Princeton called to tell me about what they wanted to do and I was beyond touched,” he adds. “During this process I have seen so many people reach out and help and I can’t thank them enough—this is really going to help us.”

In addition to the Missouri FFA’s support several other states have also come together to help rebuild this chapter.

“There have been several other states who have already shown their support,” Cutler says. “There have been chapters from Florida, Texas, West Virginia and Oklahoma who have donated money and official dress items as well as helped in the recovery process. I am thankful to be part of an organization which cares and supports not only their communities but also other people in their organization. It has been pretty cool to see all the support.”

While the next few years of rebuilding may be difficult, Cutler is hoping to bring new opportunities to his students and expand their community outreach.

“Horticulture and landscape are both big areas for our chapter,” he says. “We will continue to have a strong horticulture program and I hope to have my chapter replant trees for the city and help with the recovery process. The FFA is an organization to help students grow through premier leadership, personal growth and career success. I have seen what FFA can do in the lives of students not only in the classroom but also in their everyday life. This is an opportunity for the chapter to shine and show our community what FFA is about.”

For additional information about how to help with the Joplin recovery or how to make donations can be found at joplinffa.weebly. com/. Monetary donations for the Joplin FFA can be sent to the school with Joplin FFA on the envelop to Joplin Schools, attention to Kim Vann at 102 Gray Ave., Joplin, MO 64801.