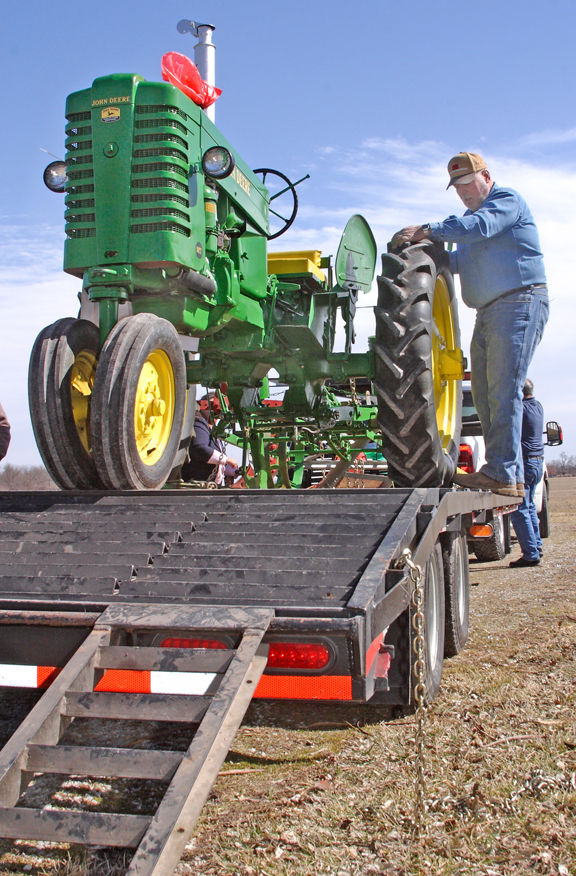 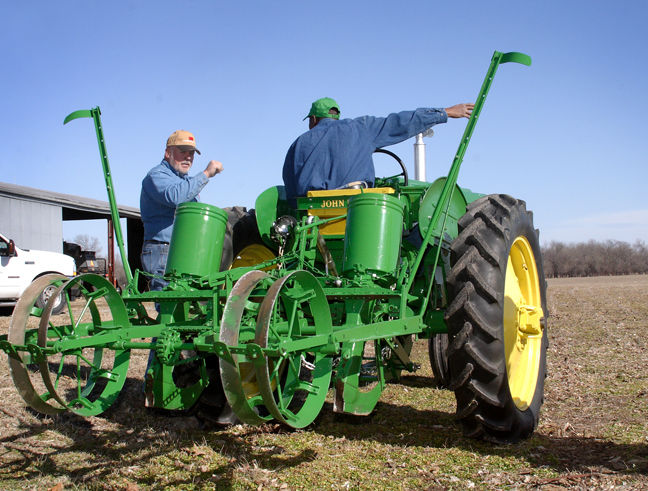 With instructions from Larry Peters, Daniel Kpowbie gets ready for his first drive. 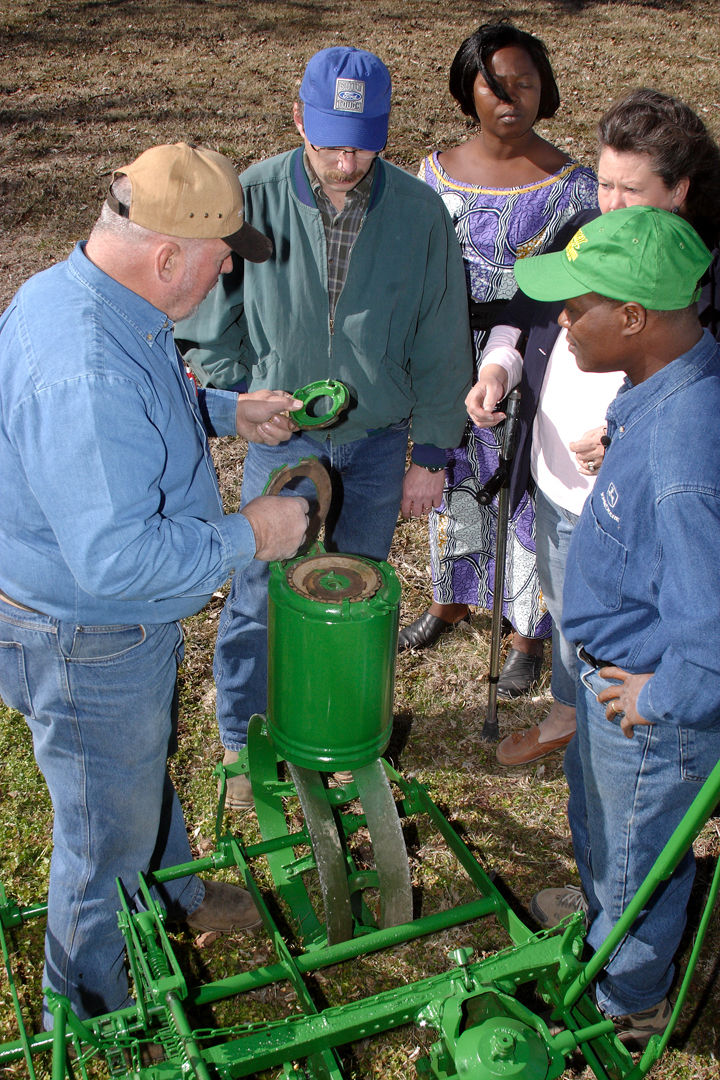 Larry Peters and Mark Meyer go over the fine points of the restored planter with Kafui and Daniel Kpowbie and Debbie Cramer. 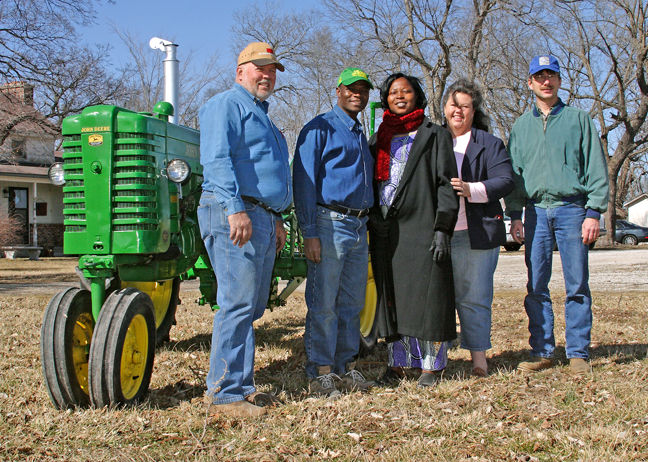 With instructions from Larry Peters, Daniel Kpowbie gets ready for his first drive.

Larry Peters and Mark Meyer go over the fine points of the restored planter with Kafui and Daniel Kpowbie and Debbie Cramer.

Applying those words to real life became an answer to a prayer for Carthage, Mo., farmer Larry Peters, and the Fairview Christian Church.

As the leader of a Wednesday night home group, he was looking for a project beyond the norm.

“I read the Farm Talk Newspaper and the article about ‘Little Red,’ a tractor that Gifts for the Nations (GFTN) had sent overseas,” recalled Peters, “It mentioned they had other projects and tractors to rebuild so I spoke with Mike Meyer and the rest of the guys.”

It was an immediate hit with everyone, including Meyer who has a special place in his heart for antique farm equipment and restoring them.

“I grew up next to my grandpa’s little farm and I loved that old equipment, haying and all that stuff. He had a little John Deere tractor and I always loved that tractor,” he said.

While Peters, Meyer and  the team worked on a couple of Ford tractors for GFTN, word about their efforts reached Kenny Porter, a Carthage man who owned a 1950 John Deere MT.

Debbie Cramer, founder of GFTN recalled, “He said the John Deere just looked good in the barn and he was too old to get up and down on it anymore and he’d rather put it to work and give it to the guys to restore. So the men started on another project for us.”

That was the starting point for the year-long ‘Project John Deere MT’ which would fulfill the needs of a farming mission headed up by LifeWind International missionary Daniel Kpowbie in the West African nation of Togo.

“They’ve bought farm land — 60 or 70 acres — to raise peanuts and corn. Eventually it will put people to work on the farm. The tractor will do the plowing and the planting, but the harvesting will still be done by hand,” noted Cramer  who is from Mound Valley, Kan.

“We went through it to make sure everything was good,” explained Peters, “We put a new clutch in it, fixed the hydraulics and made sure it was running good. Another neighbor donated the old planter and we refurbished it.”

In mid-February, the tractor was ready to be shipped and put to work and Peters and his crew had the opportunity to meet Kpowbie and familiarize him with the tractor. A small procession of trucks brought the equipment to Peters’ farm north of Carthage along with Kpowbie and representatives of the missions contributing to the project.

“Daniel’s never been on a tractor so we’re teaching him the basics of running a tractor, because it leaves this week to go to Togo,” said Peters. “He’s going to be farming with it over there and helping feed his people.”

Indoctrinating the missionary on the very farm that has been in Peters’ family for some time seemed to be a fitting place to pass on what Peters had learned. With a brief, but thorough walk-through on routine checkpoints before starting the tractor by Peters, Kpowbie mounted the John Deere MT for the first time and started the engine.

The signature rhythm of the old Deere was music to Kpowbie’s ears and brought tears to his eyes, knowing at last his hopes and prayers had been made manifest.

“This has been our dream for a very long time — to have a farm and to show people that Christians do make a difference in our country,” he said, “We have people dying from malnutrition so we started praying about it until the concept was very set up very strongly, to make it a big farm we need equipment. I started praying that I need a tractor, I need some implements and this and that so one day the Lord just opened the door with one of our partners in the United States.”

The remainder of the afternoon was spent familiarizing Kpowbie with the tractor controls and using the planter.

“Later we hooked up the plow and Daniel worked with it until sunset,” said Peters. “After that we pulled the tractor into the shed where Meyers and I showed him how to change the oil.”

Peters explained, “Mark has put together a parts catalog and a guide that we can use to talk Daniel through some of the more difficult issues. In case he does need parts, we will be here for him to contact and work with to get what he needs and ship it to him.”

With the tractor ready for the 6,000-mile trek to Togo, Peters reflected on the experience:

“I’m just thankful we get to be some small part of that. I will never know on Earth who gets blessed by this tractor. I get the sneaking suspicion that when I get to heaven there will be people who have been blessed by us spending a few nights in the middle of Missouri working on a tractor in a garage and sending it to Africa.”